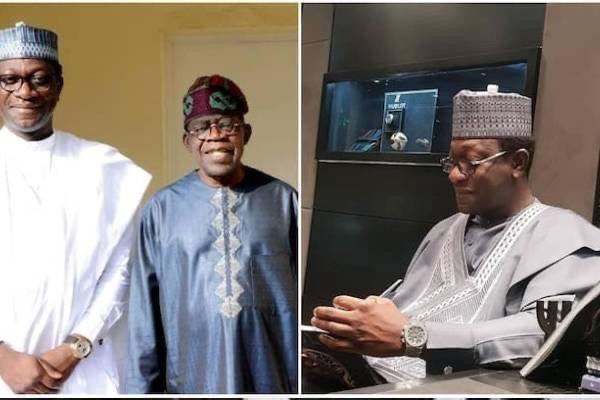 All Progressives Congress National Leader, Asiwaju Bola Tinubu, has stepped in to resolve the local political squabbles between Abdulmunin Jibrin and key stakeholders in his constituency.

Abdulmumin Jibrin had announced his decision to leave the APC for an undisclosed party on Saturday.

Jibrin did not give any reason for his decision to quit the APC, sources say this was related to the decision not to give him the party’s ticket to return to the house of representatives.

There had been a crisis of confidence between Jibrin and Kano State Governor, Abdullahi Ganduje, for some time over local political issues.

Jibrin had represented Kiru/Bebeji Federal Constituency at the House of Representatives between 2011 and 2019 before losing the rerun election to the People’s Democratic Party’s candidate in 2020.

Asiwaju Tinubu reportedly reached out to Governor Ganduje to reach a truce and ensure the unity withion the Kano State Chapter of the APC is not ruptured.

Post you may like Just In: Protest Rocks Ilesa West APC over choice of House of Assembly Candidate – See Photos

The source said Asiwaju Tinubu has already intervened on Jibrin’s behalf with Governor Ganduje and everything will be resolved.

“Jibrin is coming to see Asiwaju. Asiwaju has stepped in. Jibrin is having local issues with his constituency and Ganduje. Everything will be sorted,”