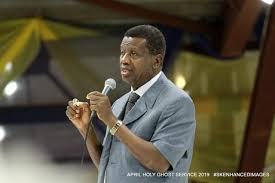 The General Overseer of the Redeemed Christian Church of God (RCCG) Pastor Enoch Adeboye has declared that religion is not the problem of Nigeria.

Pastor Adeboye made the declaration when he paid a courtesy visit to Nasarawa State Governor, Abdullahi Sule ahead of a Light Up Crusade in the state.

The General Overseer believes that the divisive tendencies of politicians are the reason for the country’s woes.

Pastor Adeboye is optimistic that his recent visits to states for light up crusades would proffer solutions to the Challenges of the country.

The acclaimed cleric who is a Mathematician and has been on a tour with Crusades all over the Country is known for his views on religious tolerance.

He took over as the head of the Redeemed Christian Church of God following the death of the founder, Pastor Akindayomi and has grown the Church a thousand fold.

He is a highly respected man of God both in Nigeria and Worldwide.

Nasarawa State is one of the States in the North Central and has been largely peaceful and devoid of issues of Religious unrest inspite of a large population of both Muslim and Christians across most parts of the State.

Successive Governments in the State have also been able to ensure harmony with all tendencies given a sense of belonging ensuring harmony and peace.

The Cleric is visiting the State against the backdrop of the brutal killing and burning of a female student of the Sheu Shagari Colege of Education in Sokoto State, Deborah Yakubu, by a mob of Students for alleged Blasphemy agains the Prophet Muhammad Peace Be Upon Him.

The Redeemed Christian Church of God also suffered a similar attack that led to the death of Mrs Eunice Elisha an Abuja based preacher who was known for her early morning preaching in the Kubwa area of the Federal Capital Territory.