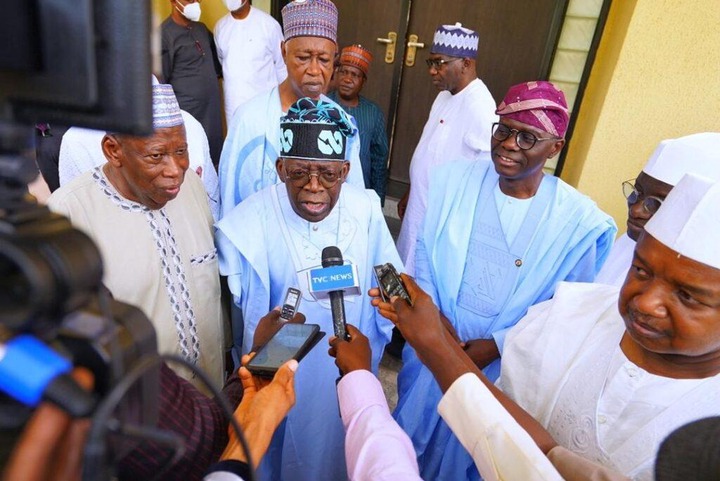 The National Leader of the ruling All Progressives Congress, APC Asiwaju Bola Tinubu, is contesting for President and he has been seeking for support across the country.

A report by The Cable index listed the various states in Nigeria and the number of delegates that would come from there who will vote to choose the presidential candidate of the APC on the D-Day. This article will discuss only some states with the highest number of delegates that are strongly backing Tinubu. If they eventually vote for him on the day of primary, it would go along way in boosting his chances.

(1). Kano State: This is the state with the highest number of APC delegates according to the report. Kano State has 465 delegates who will vote at the primary. Already, Governor Abdullahi Ganduje of Kano has declared his strong support for Tinubu vowing to mobilize Kano and other parts of the North for him. If Ganduje helps Tinubu to win the 465 votes of the delegates in his state, that is a figure that no other state can match.

(2). Borno State: The power brokers in Borno are strongly behind Tinubu. Governor Babagana Zulum is not only backing Tinubu, he was among the APC Governors that signed his nomination forms. Borno is among the states with the highest number delegates as it has 324. Apart from Zulum, Senator Kasim Shettima, the immediate past Governor of Borno is backing Tinubu as well.

(3). Osun State: This is one state Tinubu can boats of having its strong support. Governor Adegboyega Oyetola is Tinubu’s cousin. Tinubu helped him in no small measure to become the Governor in 2018. With 308 delegates, Osun would boost Tinubu’s chances. Even an influential ex-Governor of Osun, Bisi Aknade is strongly backing Tinubu in Osun and beyond.

(4). Lagos State: This is Tinubu’s base where he wields the highest influence. He has the APC structures in the state backing him. Governor Babajide Sanwo-Olu has repeatedly said it publicly that Tinubu has their unflinching support. According to the index, Lagos came fifth with 304 delegates. This will be of great help to Tinubu if he gets the support of all the delegates.

Apart from these four, there are other states backing him but the they do not have high number of delegates like the four discussed above except Katsina State. But, the key political leaders in Katsina may be divided on this issue of backing Tinubu.