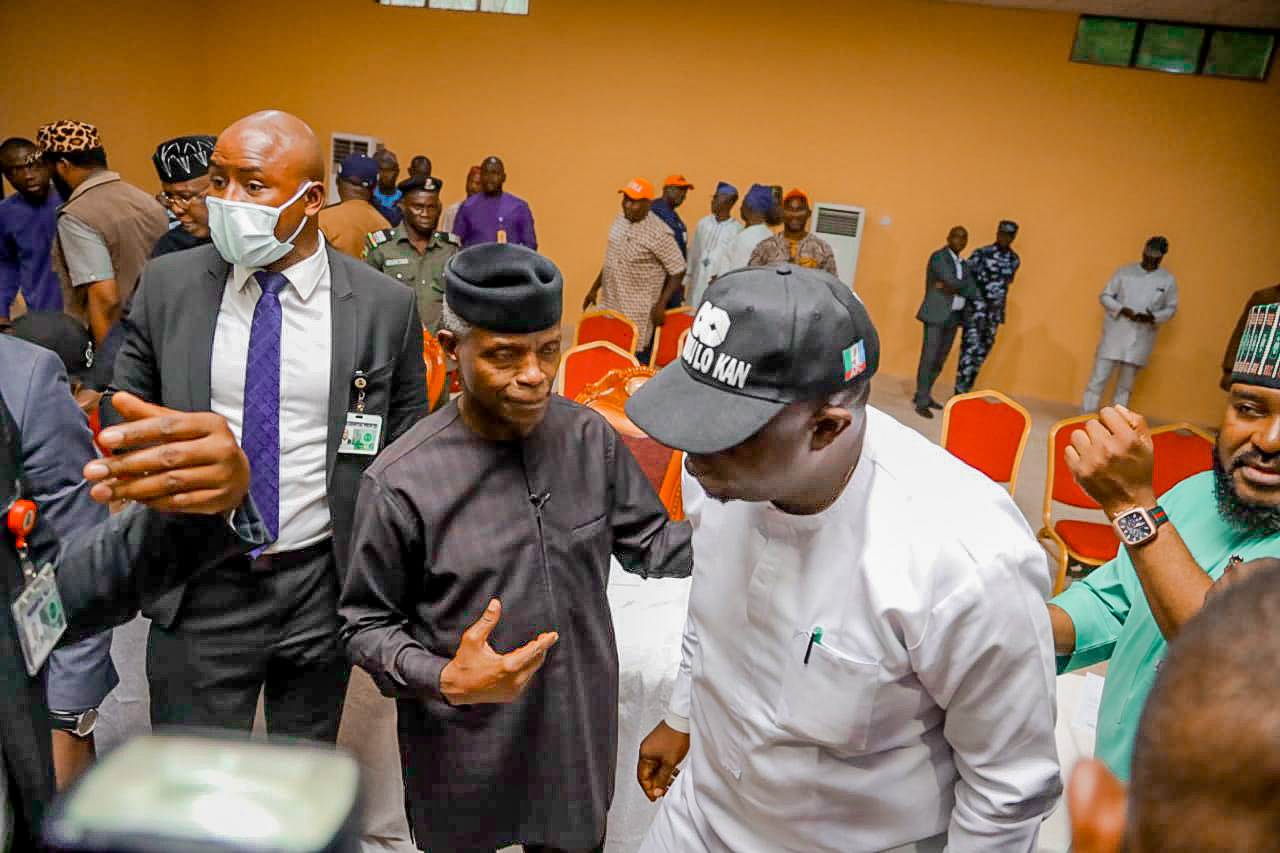 The Vice President, Prof Yemi Osinbajo had an unproductive outing in Osun on Friday as he received a lukewarm reception from the All Progressive Congress (APC) delegates as some donned the insignia Asiwaju Bola Tinubu identity cap while leaders of the party in Osun including Governor Gboyega Oyetola; the speaker of the House of Assembly, Timothy Owoeye; National Secretary of APC Senator Iyiola Omisore and all National Assembly members from Osun including Senator Bashiru Ajibola, the senate spokesperson and DG Oyetola Campaign organization, were conspicuously missing though he was received by the deputy governor, Benedict Alabi;

Also, very few cabinet members of Governor Oyetola were present; about four out of 40 including the Commissioner for Works and Transport in the state, Engr. Remi Omowaiye, who also used the Tinubu cap to the venue of the event.

The vice president’s visit was in continuation of his mission to woo delegates across the states to give him their votes at the forthcoming presidential primary of the party.

His visit to Osun was significant because the state boasts of one highest number of delegates. However, the meeting with the delegates who assembled at a hall within the Governor’s House didn’t not yield the required result as aside the fact that key players were conspicuously missing, the delegates did not show enthusiasm to meet the vice president.

It was revealed that it took the intervention of the State party chairman Prince Gboyega Famodun to appeal to the delegates, some of whom donned the Tinubu logo cap to stand up to greet the vice president.

However, he was received at the palace of the Ataoja by members of the former governor, Ogbeni Rauf Aregbesola camp who could not attend the delegates’ conference at the governor’s house because they are not delegate members.

Professor Yemi Osinbajo in his message to the delegates had reiterated that he remains the best to clinch the APC ticket because he is the most prepared and experienced of all aspirants in the 2023 presidential election.

He said the country needs a leader with experience, courage, capacity and economic understanding that will rescue it from its current challenges, adding that he is the one with the requisite experience needed to pilot the affairs of the country having under learnt under President Muhammadu Buhari.

He noted that his mission was to inform the delegates of his intention to succeed the incumbent President Buhari having served under him loyally for seven years.

The reception given to the vice president however angered his supporters who went on social media to condemn the act. One of them by the name Oluwo of social media with the handle

I swear, when we (Osinbajo) become the President, we’ll not bring a single Development to Osun. How can a whole VP enter the hall and they cannot stand until the MC told them, worst still, they could not clap or hail him, still dey flaunt Jagaban’s cap. I swear, na rubbish o