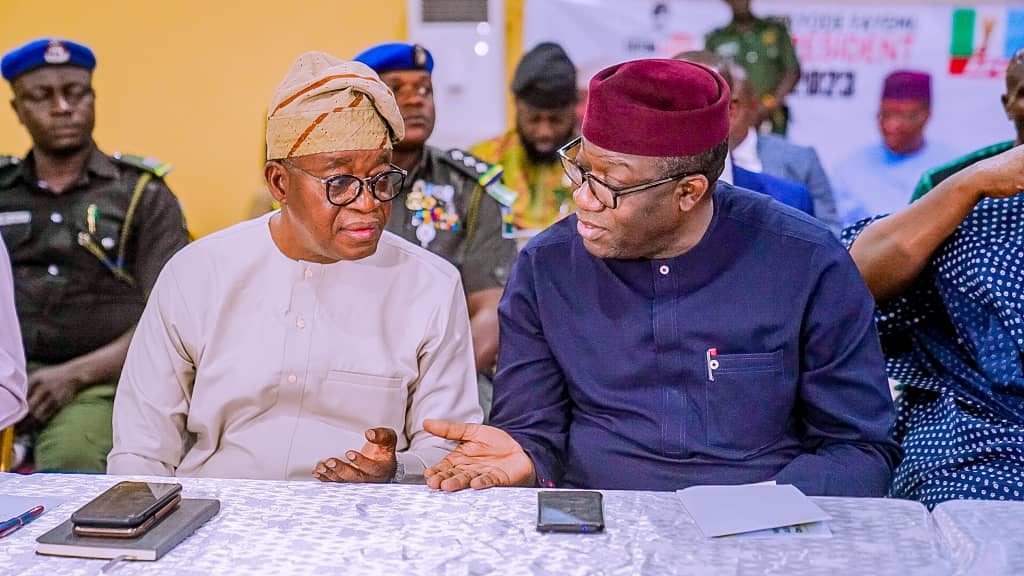 …as he visits Osun for political consultation

Governor Kayode Fayemi of Ekiti State has expressed his readiness to support incumbent Governor of Osun and Candidate of the All Progressives Congress in the State, Adegboyega Oyetola, to ensure his success, especially in the July 16 governorship election.

Fayemi, who is also the Chairman of Nigeria Governors’ Forum, lauded Oyetola’s rich understanding of governance and progressive ideologies, saying he has shown unusual capacity to keep the state afloat amid depressed economy.

Fayemi stated this in Osogbo during his consultation with the party faithful in Osun.

He harped on unity in the South-West region, saying whatever could stand in the way of the region’s collective success must be firmly resisted.

“I must immensely thank the governor for his generosity of spirit and constant solidarity from the very beginning, even when I was not governor. Whatever little it appears I have contributed in Osun does not come anywhere close to what Governor Oyetola has done for me.

“It is only right that I come to Osun because those who know me know that it’s one Fayemi, one Oyetola.

“I am unapologetically committed to his success in this state, and that is how it should be because he has always, consistently supported me, in sadness and in joy. So, you will see me in full colour here very soon.

“In the last election, even when things were a bit funny, we were here to do the needful and God gave us victory. That victory will be replicated by God’s grace.

“This man is our leading light. He has done magic in this state. Many may not know, but I know because I’m chairman of the Nigeria Governors’ Forum, and I know what comes to this state in terms of revenue. But what I don’t know is how he has managed non-existent resources.

“He is not only a financial engineer but a financial surgeon. He has gone ahead to fix the things that put us in problems in the past, the things we were not doing that caused us problems. He did them out of nothing. So, there is no way you will not look up to such a man who is given to service.

“So, for me, it is an immense pleasure and honour to be associated with Governor Adegboyega Oyetola”, he said.

On the purpose of his visit, Fayemi urged the delegates in Osun to exercise unity of purpose in supporting South-West agenda, saying that victory for one is victory for all.

He continued: “For me, the victory of South-West means that we are all victorious, because there is no aspirant from the zone who is not eminently qualified. Our values have remained constant and we are leaders in the progressive movement.

“I have not come with any sense of entitlement. I have only come to make an appeal. And it is important to dispel any insinuation that there is one big battle going on among us. This is not true, as a matter of fact, I told Asiwaju that I am coming here today. So, people should be careful not to inherit non-existent enemies. What is important is the progress of our people and the success of the South-West.

“If there is going to be any risk to the success of the South-West, I want to assure you that there will be a collective resolve. We are specially endowed to help our people and make a difference in Nigeria”, he added.

In his remarks, Governor Adegboyega Oyetola lauded Governor Fayemi for his support over the years, adding “I am elated to welcome my dear brother to our State. We have been brothers for several years before now. Our journey of brotherhood didn’t start from politics. It has been over 30 years of brotherhood. He has also been there for me at any point of my need and he has always been consistent.

“The beauty of what is happening is the fact that Southwest has brilliant aspirants to showcase. It shows that we have the best for the contest.

“As you could see, this gathering is a mixture of who is who in our party, most importantly the members of the State Working Committee, Party Elders, Igbimo Agba, delegates among others. They are here because they know you are our brother and they know you are their own.

“I pray that God will grant your heart desires and by God’s grace, southwest will produce the presidential candidate of our party”, Oyetola said.