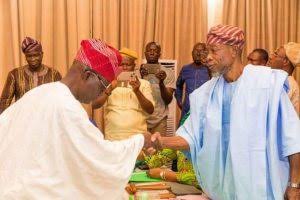 The Office of the Chairman of the Osun State All Progressives Congress (APC), Prince Gboyega Famodun, has warned the immediate state secretary of the party, Alhaji Ayobami Rasak Salinsile, to desist from parading himself as the state chairman of the party henceforth.

In the same vein, according to a statement issued by Kola Olabisi, the Media Aide to Prince Gboyega Famodun, in Osogbo, the Osun State capital yesterday, members of the public should stop addressing the immediate-past state secretary of our party, Alhaji Salinsile, as the state chairman of our party which he is not.

It has been observed at different fora that Salinsile has been fraudulently introducing himself as the state chairman of our party.

An instance was a newstalk about the 30th year remembrance anniversary of his late father which was written in his name and broadcast by an Osun State-based radio station few days ago where Salinsile was dubiously referred to as the state chairman of our party.

Members of the public are hereby reminded that there is only one duly-elected state chairman in our party who is Prince Adegboyega Famodun.

Any other person who is parading himself as the chairman of the party is an impostor.

It is a public knowledge that Famodun’s re-election as the Osun State chairman of our party was not a subject of litigation in any known court in this country.

The statutory security authorities in the state in particular and the entire country are hereby notified to take note of this identified anomaly and act in accordance with the provision of the law of the land should the fraudulent self-identification of another person as the state chairman of our party is embarked upon apart from Prince Famodun after the publication of this information.

Individuals and corporate bodies are also alerted by this publication to desist from identifying or addressing Salinsile as the state chairman of our party.

This warning on fraudulent identification is also extended to those who have been impersonating the other duly-elected state officers of our party across Osun State.

The public is also hereby notified that the authentic, duly-elected and recognized state executive members of our party are the ones elected under the chairmanship of Prince Famodun.

It is a gross impersonation for any one, be it in the state, local government and ward levels, to identify himself or be addressed as officials of our party other than those under the chairmanship of Prince Gboyega Famodun.

The party members and the public are hereby reminded that our party is a product of the law of the land where orderliness reigns supreme.

Genuine and authentic members of our party are enjoined to continue to work assiduously as a team for the re-election bid of Governor Gboyega Oyetola in the July 16, 2022 governorship election in the interest of continuous development of our state.