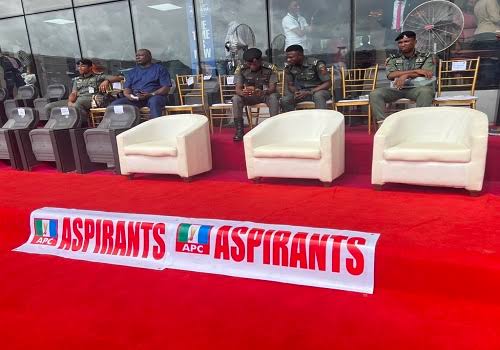 Two governorship candidates have been elected in Ebonyi from parallel primaries organised by members of the All Progressives Congress (APC) in the state.

The parallel primaries for the APC governorship ticket took place in the state on Thursday.

The governorship primaries were organised by the Ebonyi APC faction loyal to David Umahi, governor of the state, and another faction loyal to Elias Mbam, former chairman of the Revenue Mobilisation Allocation and Fiscal Commission (RMAFC).

The election of the Umahi-led faction took place at Ngele Oluta township stadium, Abakaliki, and it was won by Francis Nwifuru, speaker of Ebonyi state house of assembly, who polled 743 votes.

Nwifuru is said to have the backing of Umahi.
Meanwhile, the second faction organised their primary at the campaign office of Mbam in Abakaliki.

At the factional primaries, Mbam polled 741 votes to defeat Nwifuru, who got seven votes, Julius Ucha had four votes, and Rosemary polled one vote.

According to NAN, the results were announced by Egwu Inya, the returning officer.

Naijinfo understands the Umahi-led faction is the faction recognised by the national working committee of the APC.