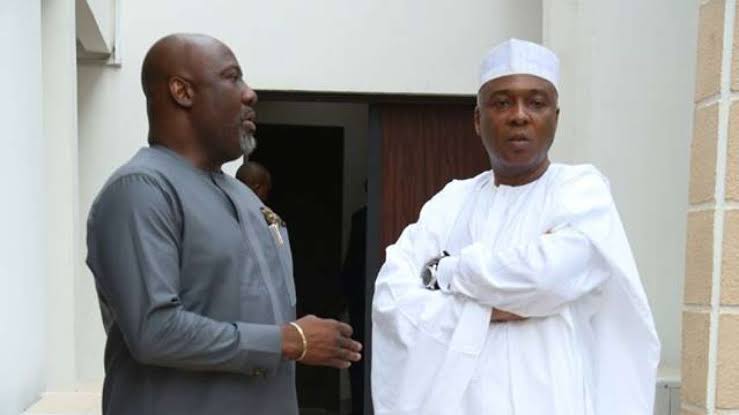 A former Senator representing Kogi West, Dino Melaye, has backed the presidential aspiration of former vice, Atiku Abubakar, saying he will win the 2023 poll with a landslide.

Melaye, while featuring on TVC ’s current affairs programme, Journalists’ Hangout, expressed satisfaction with the conduct and outcome of the 2022 presidential primary of the Peoples Democratic Party.

The former lawmaker equally expressed his confidence in the party’s ability to wrestle power from the APC government in 2023.
According to him, the convention produced the best candidate to fly the party’s flag in a free and fair contest that every participant is proud of.
Reacting to questions about his switch of support from the former Senator President, Bukola Saraki to former Vice Vice President, Atiku Abubakar, the former lawmaker made it clear that he never switched support.

He explained that he supported Saraki 100 per cent while he was with him.

“I did not switch support from Saraki to Atiku. I was 100 per cent with Saraki when I was with him. I have no problem with Saraki, I still saw him this morning and we both laughed together.

“I chose Atiku this time because I have to stay with the known to the unknown. At this time, we need a unifier, who can unite Nigeria. One who cannot be seen as a Muslim, or Christian. Atiku is a popular person whose name is known every in Nigeria. So I moved from unknown to known. So, I did not switch support but support the man who can make Nigeria great,” Melaye said.

Speaking about his defeat at the party’s senatorial primary, the former lawmaker said all that happened at the election has become history and doesn’t want to discuss it again.

He said, “I have moved on. All that happened in the Senate rerun have become history. I really don’t want to dwell on the past. That primary has gone and I have moved on.

“As a Senator, in terms of representation, I did my best because I implemented so many projects. In the history of the National Assembly, I have the highest number of bills. The records are there, they are incontrovertible. I did my best for my people.”

He dismissed the rumour that Sokoto State governor, Aminu Tambuwal, betrayed his colleague and fellow aspirant, Nyesom Wike, when the former announced his withdrawer from the contest and directed his delegates to vote for Atiku Abubakar.

Melaye said Tambuwal did not betray Wike as there was no written agreement between the two of them.

“Governor Tambuwal saw the necessity to elect a candidate that can unite Nigeria because our dear nation needs a father figure who can unite everyone. Someone who will be able to unite Nigeria and that person is Atiku Abubakar.

“Alhaji Atiku is sound and healthy, politically sagacious and intellectually sound. Atiku will not fail, he will win by a landslide. Whatever APC is going to do in terms of manipulation, Atiku is the next president of Nigeria. Our convention has shown that we are more united than ever. We are on big family,” he added.