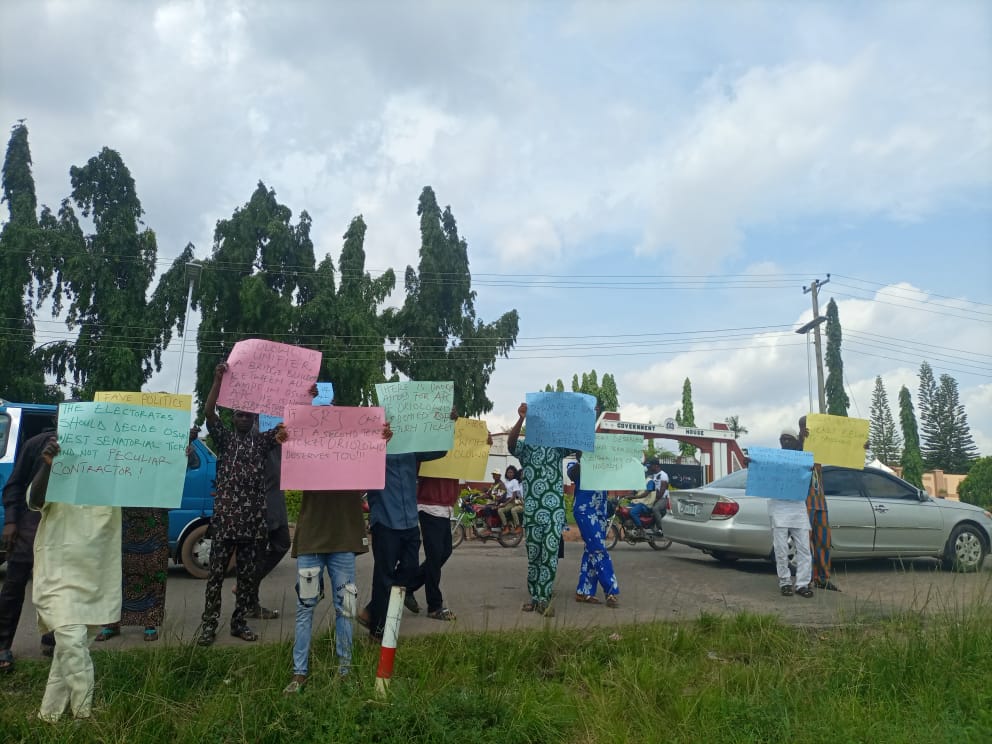 Some members of the All Progressives Congress in Osun West Senatorial District have protested against alleged manipulation of the party’s primary election to produce candidate for the 2023 national assembly election in the district.

The APC members claimed that Senator Adelere Oriolowo who is currently representing Osun West at the Senate won the Saturday, May 29 senatorial primary of the party.

But, according to the APC members, the result of the primary has been manipulated at the Government house in a bid to deny Oriolowo the return ticket.

The protesting APC members called on Governor Adegboyega Oyetola and leadership of the party in the state to give the party’s ticket to OrioIowo, who they said is the real winner of the primary election.

The protesters who converged in front of the Government House, Oke-Fia, Osogbo, around 3pm on Wednesday, were armed with placards with various inscriptions such as ‘’Osun West is safe with Oriolowo, if he is not abusing Aregbesola, it does not mean he is not supporting Oyetola’, ‘Return Oriolowo to the Senate’, ‘Oyetola please beware of bad advisers, Oriolowo deserves to be returned’, ‘The electorate should decide Osun West Senatorial ticket and not Peculiar contractor’.

Addressing journalists, Comrade Salami Ajibade, one of the protesters, said there is no lawmaker in the national assembly from Osun that has done tremendously well like Senator Oriowo since he became the Senator of Federal republic of Nigeria.

He explained that the essence of the protest was to expressed their dissatisfaction on the alleged manipulation of the Osun West Senatorial District primary election result, insisting that OrioIowo remains the choice of majority of the people.
Ajibade who recalled that since Saturday that Osun APC held its senatorial primary, the party members are yet to know who the winner is.

He noted that for Osun APC to continue to wax stronger, OrioIowo must be considered with returned ticket to the red chamber.

The APC stalwart noted that if his counterpart from Osun Central, Senator Ajibola Basiru can be returned unopposed and Hon. Israel Famurewa could be given the ticket unopposed, there was nothing stopping the party to give a return ticket to Oriowo as well.

Ajibade said: “We decided to stage the peaceful protest because we are reliably informed that some people have manipulated the result of the APC primary election for Osun West Senatorial District. We were told that Oriolowo will be denied return ticket because he does not belong to the IleriOluwa caucus of the party.

“We want everybody to know that Oriolowo won the primary election. He is the choice of majority of APC members on Osun West. The fact that he is not abusing Aregbesola as some people wanted does not mean he is not committed to the second term ambition of Governor Oyetola.

“Sen. Oriolowo has performed excellently well at the Senate within the space of three years in office. Because of the fact the he’s not a noisemaker lawmaker like others does not mean he had not done well.

“If Senator Ajibola Basiru can be returned unopposed, and Hon. Israel Famurewa can be given the ticket unopposed, we know there is no excuse for the party not to also return Oriolowo as well. Oriolowo should enjoy return ticket like other candidates from Osun Central and Osun East Senatorial Districts.