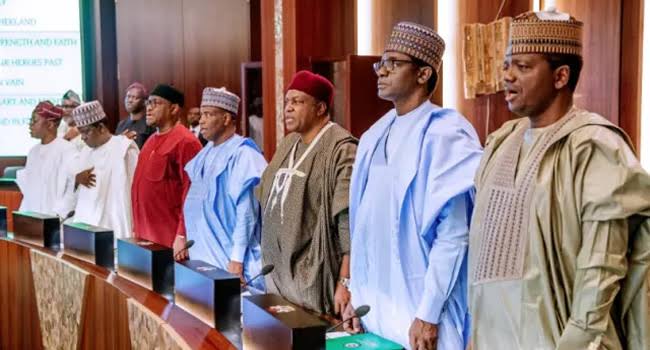 All Progressives Congress Governors from the Northern part of the country have endorsed the transfer of power to the South.

The decision was taken at a meeting of the governors on Saturday night in Abuja.
According to the statement issued at the end of the meeting which was signed by the governors, Jigawa State Governor Badaru Abubakar also withdrew from the contest.

It was one of the last in the series of meetings by the Northern governors.

But at their meeting on Tuesday after earlier meeting with President Buhari, the Southern governors led by Rotimi Akeredolu vehemently insisted that it was the turn of the South to produce the next president.

The Southern governors insisted it was impossible for another Northerner to succeed President Buhari after eight years in office.
The Northern governors said after Saturday’s meeting, “After careful deliberation, we wish to state our firm conviction that after eight years in office of President Muhammadu Buhari, the presidential candidate of the APC for the 2023 elections should be one of our teeming members from the southern states of Nigeria.

“It is a question of honour for the APC, an obligation that is not in anyway affected by the decisions taken by another political party. We affirm that upholding this principle is in the interest of building a stronger, more united and more progressive country.

We are delighted by the decision of our esteemed colleague, His Excellency, Governor Abubakar Badaru to  contribute to this patriotic quest by withdrawing his presidential aspiration.”

The governors will communicate their decision to President Buhari during a meeting scheduled for tomorrow with a view of working towards a consensus.

The president is at the moment meeting with all the presidential aspirants.