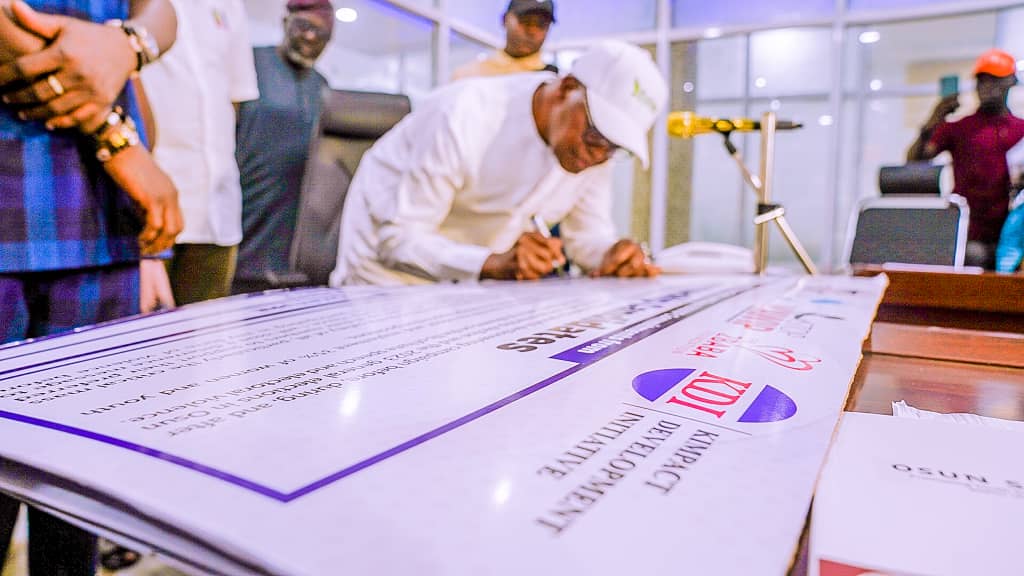 The Osun State Governor, Gboyega Oyetola has re-appointed some commissioners in his cabinet who had resigned their positions before contesting National Assembly tickets in the primaries of the ruling All Progressives Congress in May.

Recall that the governor had directed those within his cabinet who were interested in contesting positions in the forthcoming general elections to resign.

The four ex-commissioners had reportedly lost their bids to clinch tickets at the National Assembly primaries of the party.
Meanwhile, Oyetola, has asked the State House of Assembly to reconfirm and re-appoint the re-nominated Commissioners and two other Special Advisers to fill vacant positions in the State Executive Council.

The Speaker, Hon. Timothy Owoeye, while reading out the request of the governor for the re-confirmation of the Commissioner and SAs nominees at the plenary on Thursday, said the designates are to submit 35 copies of their resume to the House of Assembly on or before Monday 27th June, 2022.

While requesting for the confirmation and re-appointment of Commissioners and Special Advisers, Governor Oyetola said: “In line with the provisions of Section 192(2) of the Constitution of the Federal Republic of Nigeria 1999 as Amended, I hereby present the under listed nominees for consideration and confirmation by the House of Assembly into the position of Commissioners/Special Advisers in the state of Osun with a view to filling the vacant positions in the State Executive Council.

The Assembly, however, constituted a 7 man Committee headed by the Deputy Speaker, Hon. Simeon Popoola to screen the nominees.
However, the State Assembly has reconfirmed and extended the tenure of Caretaker Management Committee in the Local Government Councils and Local Government Development Area Councils in the state
Oyetola had requested that the tenure of the caretaker committee be extended in line with Section 3(A)(i) (ii) (III) of the State of Osun Local Government Administration and Amendment 7 Law,(2021).

The request letter read in part, “This is to bring to your notice that the 6 months term of the Caretaker Management Committee in the Local Government, Councils, Local Government Development Area Councils will expire on the 12th of July, 2022.

“I hereby request the Distinguish State House of Assembly, Osun State to confirm the Appointment of the Caretaker Management to run the affairs of the Councils for another period of 6 months.”

The speaker while commending the governor, emphasised the need to prevent a vacuum in Local Government being the closest tier of government to the people. Owoeye enjoined the Caretaker members to Improve on their relationship with the Assembly to ensure the welfare of the citizenry