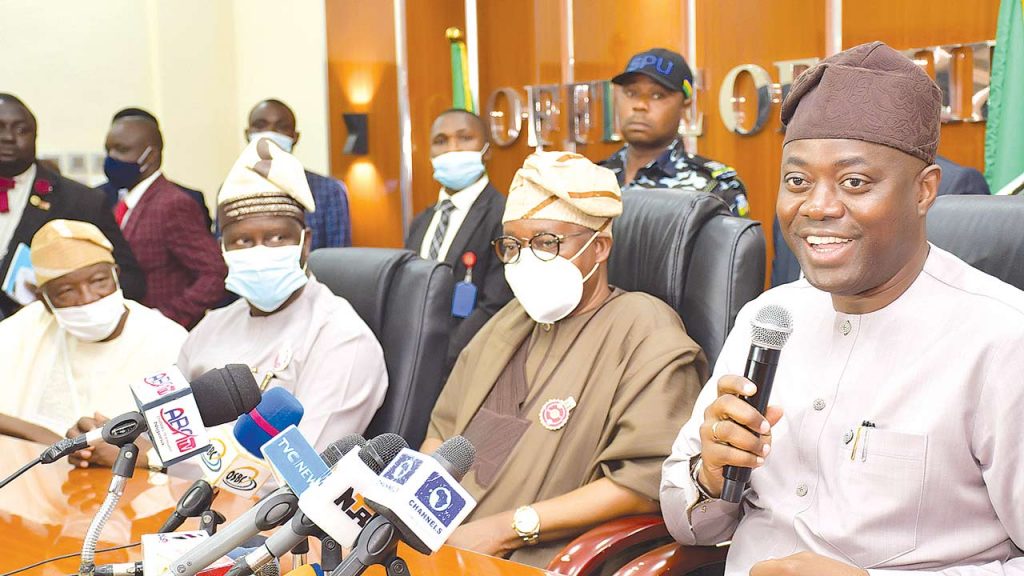 The governments of Oyo and Osun states have resolved to carry out rehabilitation and reconstruction of the Iwo Road interchange-Olodo-Lalupon-Iwo-Osogbo road.

The road is a major link between the neighbouring South-West states.
The Commissioners for Public Works, Infrastructure and Transport in Oyo State, Professor Daud Kehinde Sangodoyin and his Osun State counterpart, Engr. Omowaiye Oluremi , who jointly announced the historic collaboration on Monday, at a press conference held at the Oyo State Ministry of Works and Transport, Secretariat, Ibadan, said the development would enhance the quality of lives of the people.

Sangodoyin explained that the Oyo State government is to reconstruct from the Iwo Road interchange Ibadan to the Oyo State boundary with Osun spanning a total of 29.2kilometres while the Osun State government will take it up from the Oyo State boundary down to Iwo and Osogbo spanning 54.4kilometres
He said: “On the authority of Governor Seyi Makinde and Governor Adegboyega Oyetola , we are here to address the press on the joint collaboration of the reconstruction of Iwo Road interchange road to Ogunremako junction, down to Lalupon, which is the boundary between Osun and Oyo States.

“The two-state commissioners in charge of works and transport have met severally and did a joint inspection of the road for the benefit of our people, and for us to be able to award the contract.”
According to Sangodoyin, the project sits right within the agenda of the Governor Makinde-led administration to take Oyo State people from poverty to prosperity and to build infrastructure that targets the economy of the state.
“One of the major benefits of the project is regional integration, using that axis. For the two states, agriculture is the only comparative advantage. So, in expanding the economy of the two states, we have to focus on agriculture and food security, and that is why we want to tap into the resources on that axis and contribute to what we call the Domestic Resource Flow, while expanding the economy.

“Also, we looked at security around that axis. By the time we reduce the infrastructure deficit around that axis, we would have improved on the security infrastructure, because, as I speak now, the road from Iwo down to Olodo is nothing to write home about.
“If we are able to cooperate with Osun State, we will be able to improve the security infrastructure.
“We have commenced the processes of awarding the Iwo Road interchange to Lalupon, the boundary between the two states and have sectionalised it into three parts ”

“The first part is from Iwo Road interchange to Olodo bridge, which is 7.7km and the stretch of the bridge, which we are going to dualise, is 500 metres; from Ogunremako junction to Lalupon, which is 20.3km. In all, we are working on a 29.2km stretch and within the next few weeks, we should be able to award the contract. The two governors will come together to flag it off in the month of July ,” Sangodoyin added.

He said: “Just like he ( his Oyo State counterpart ) said, we are brothers. For the two governors, what is important is the development of our race. Bad infrastructure does not know APC or PDP. If you look at that road, you can see an alignment of 5km stretch and that is the easiest route to Ibadan from Osogbo .

About a year ago, we started a discussion on the need to collaborate and the two governors graciously agreed.
“We all know that the two states are agrarian states and this development will allow for easy movement of agric produce on that corridor.

Giving some specifics of that involving the Osun government, Omowaiye said the project includes dualisation of 2.8kilometres Dele Yes sir roundabout-Sawmill section in Osogbo , 51.6kilometers single lane to boundary of Oyo state , 1.5meters shoulder either side, 2.0metres median, 1.5metres walkways on either side, solar-powered street lighting, beautification of roundabouts and islands.

“I can tell you we have not brought politics into this. What we want is good infrastructure. This is a good thing for the two states, which will promote commerce and agriculture as well as make movement between residents of the two states easy.”

The Oluwo of Iwoland, HIM Oba Abdulrasheed Adewale Akanbi while receiving the Commissioners for Works in the two states, Engr. Oluremi Omowaiye and Prof. Dahud Sangodoyin, in his palace today, described the extension of the infrastructural partnership to Ibadan-Iwo-Osogbo road as monumental, and a great joy, saying the duo governors are pride of Yorubaland. He has described the collaboration between the duo of Governor Gboyega Oyetola and Engr. Seyi Makinde of Osun and Oyo States respectively on infrastructural growths as the highest ever.