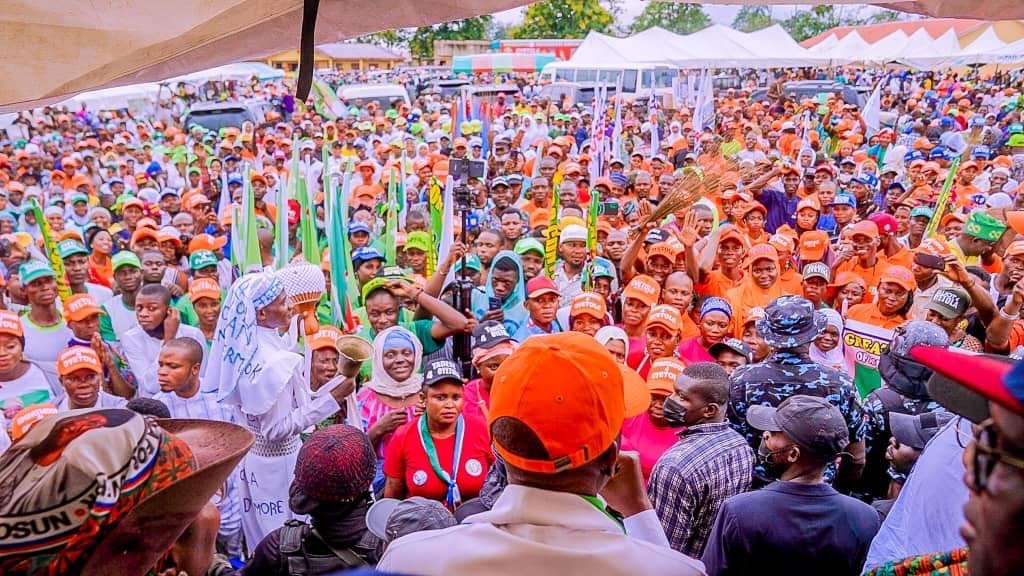 The Timi of Ede, Oba Munirudeen Adesola Lawal, has urged indigenes and residents of the ancient town to go out en masse on July 16 to vote for the candidate of the All Progressives Congress, APC, Governor Gboyega Oyetola.

The revered monarch also declared his personal support for the re-election of Governor Oyetola, noting that the Governor has performed well and deserves to be returned for a second term.

Ede is the hometown of the dancing candidate of the Peoples Democratic Party, Ademola Adeleke.

Oba Lawal acknowledged some of the interventions of the Oyetola-led government in the last three and a half years towards the socioeconomic and infrastructural development of the town, saying, “one good turn deserves another.”

He said the Governor has justified the reason Ede people should re-elect him and pave way for continuity in order to consolidate on his modest achievements.

“Oyetola is Omoluabi par excellence. He is known for peace and tranquility. You are doing well. There is no doubt in what the two previous speakers have said as regards the landmark developments that your administration has brought to my town since your assumption of office.

“The development is obvious and people can see it, most importantly your intervention on infrastructure. Nobody can do it all. I am happy for you because you have many things to point at and make reference to in terms of development. That is why you are confident to come for our support. Your good gesture will in no doubt trigger the need for the people to support and vote for you.

“I thank God for your life and style of governance. We have seen all you have done and we have equally listened to all you promised us to do if re-elected and these are enough for us to support you and vote for you.

“I can remember vividly that shortly after your emergence, you came to us to demand for what we wanted and part of the things we requested for have been done and we are happy for this.

“Ede is one of the noble ancient towns in Yorubaland. You can see our palace. We need your support and we will come to you after your re-election to support us to get our palace fixed. We pray God to support you and lead you to victory. You will emerge victorious by God’s grace”, he added.

Oyetola in response said the socioeconomic, infrastructural interventions were not in any way premised on politics or sentiment but rather on the avowed commitment to meet the people’s needs and deliver equitably on the mandate freely given to him.

He said his achievements within the three and a half years have been made possible by the support he has been receiving from the people.

He reiterated his personal love and affection for Ede and her people as manifested in the number of Ede indigenes that are in his cabinet, saying the infrastructure development the town has witnessed was in fulfilment of his electoral promises made to the people while seeking office.

He said God put him in power to serve the good people of the state.

He promised not to relent in his efforts to continue to bring succour to the people and ensure the people reap the dividends of democracy and good governance.

“I thank God that if someone is known to have loved Ede, I love Ede.

“If I can recollect vividly when I was campaigning in 2018, I know how people demanded for the reconstruction of road linking Oke-Gada to Ejigbo junction. I did the road not because of politics but because of our love for the people of Ede.

“We know how the Oke-Gada road was before our intervention. We have identified other roads in Ede to be reconstructed. My three and a half years in office was full of landmark developments despite obvious challenges occasioned by COVID-19 and EndSars.

“So, I am here to seek your support and prayers as I am seeking re-election. Please, support us to complete our eight years and I can assure you that before the end of my eight years, Ede will be turned around for better. This is the time of reward. I believe that Kabiyesi loves me wholeheartedly and I want you to help to talk to the people to vote for us”, Oyetola said.

The former Speaker, Osun House of Assembly and Ambassador to Mexico, Barrister Adejare Bello, said Governor Oyetola has justified his love for Ede, not minding the level of support and votes he got in the 2018 governorship election.

He called on the people of Ede to turn out in large number to vote for the Governor as part of efforts to reciprocate his good gestures for the town.

“When Oyetola got to power, we cried to him for our road and he swung into action and fixed the road. As we all know, before Oyetola’s intervention, one could fish in the ponds on our roads, particularly the one that leads to Oke-Gada.

“Oyetola has contributed a lot to the development of Ede and just recently, he ordered the reconstruction of other roads we have identified for reconstruction. We are sure that if re-elected, he will do better and by the grace of Almighty God, he will be returned for second term”, Bello added.

The duo further enjoined the indigenes and residents of the ancient town to shun sentiment and vote for competence, capability and someone who possesses the required qualities and administrative acumen to govern the State.