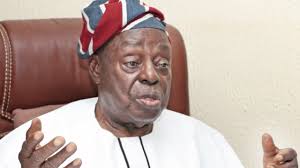 … says he has lifted thousands of Nigerians from poverty to prosperity through wealth, job creations

The Nigeria Union of Journalists (NUJ) South West Zone B has described Bamofin Afe Babalola (SAN), Founder and President of the Afe Babalola University Ado-Ekiti (ABUAD) as a very rare gift to humanity and one of the finest sons of Ekiti land.

The NUJ South West Zone B says Aare Babalola is one of Nigeria’s and indeed, Africa’s greatest owing to his exemplary and positive impact on the lives of millions of the black race. The South West Nigerian extraction of the national body of journalists explained that Aare Babalola’s exemplary and positive impact in this respect manifest in his multiple roles as first, the highest employer of labour after the Ekiti State Government, secondly, an iconic and highly influential legal practitiioner, and thirdly, a humanist and quitessential philanthropist whose humanitarian feat is in every respect, unparalled.

The foregoing recognition was contained in a press statement signed by the recently elected Vice President of the NUJ South West Zone B, Comrade Ronke Samo, which was made available to newsmen in Ado-Ekiti on Thursday.
Comrade Samo who recently emerged as the first female Vice-President of the NUJ South West Zone and is currently the only female national leader of the Union in such category, said it was high time Nigerian fourth estate of the realm, of the South west zone, imbibe the culture of celebrating rare individuals who have become icons of success, industry, and leadership among others in the region.

She singled out Aare Afe Babalola as one of Africa’s greatest and finest sons, whose exemplary imprints in legal profession, education, employment/wealth creation, leadership and most essentially, philanthropy, the world will forever celebrate.

Samo’s statement reads in part: “Nigeria has in Aare Afe Emmanuel Babalola, a rare gem and special breed and this is because of many enviable achievements of this great man. Babalola has become one of Africa’s finest and greatest in several ways, he is a legal icon, a highly successful educationist and entrepreneur, one of the most industrious Nigerian, an exemplary leader and ever willing philanthropist.

“Afe Babalola strides the legal profession in Nigeria and indeed Africa, like a Colossus. This is why he has since emerged in several leadership capacities in the noble profession, one of which is the President of arbitrators in Africa among others. This equally is owing to his iconic imprints in the profession which have served as major reference points for many practitioners. It is indeed on records that Aare Afe Babalola’s contribution to the development of the Nigerian legal system is iconic.
No wonder he’s mostly referred to as Kabiyesi and Bamofin worldwide.

” While many in the Nigerian legal profession had achieved similar feats, Aare Afe Babalola has surpassed them by becoming a highly successful and influential entrepreneur in several other sectors such as education, agriculture and leadership. Aare Afe Babalola is the man who rejected ministerial positions freely offered him by the federal government four times so that he could concentrate more in nation building in the areas of employment and wealth creation through his entrepreneurship role.
His private University has emerged the best in Africa in global webometric, and other ranking and this is for a number of inspiring reasons, one of which is the fact that the University was the first to found a cure for the dreaded Covid-19 epidemic from locally sourced medical substances in Nigeria.

“Aare Afe Babalola currently has in his employment about 4000 Nigerians working and earning their living in his University which also consists of the fast growing and very large University farm and one of Africa’s best and most equipped hospitals, the ABUAD Multi-System hospital.

“Students from the Afe Babalola University have made Nigeria and indeed Africa proud in many respects by blazing the trail in their chosen fields of study. They have won both local and international grants and scholarships and equally emerged the nation’s ambassadors in many global organisations.

“What is very unique about Aare Afe Babalola’s highly influential and humanitarian gesture is that all classes of humanity enjoys his benevolence and industry. They include the educated elite, the ruling class, middle class and more importantly the masses, comprising mainly the uneducated Nigerians. This fourth set of humanity who are drinking largely from Baba’s milk of human kindness serve as cleaners, messengers, security officials and drivers among others in ABUAD and they receive far higher salaries compared to what their colleagues in some government owned and also private institutions earn on monthly basis. This happens because Aare Babalola is compassionate, caring, loving, and very selfless.

“Aare Afe Babalola is not resting on his oars in creating wealth and providing massive employment opportunities for the teeming Nigerian youths and middle aged who are in dire need of such opportunities, especially with the sad reality that Nigerian government cannot provide such opportunities for all needing them. Aare Babalola’s industrial Park which promises to provide more thousands of jobs for Nigerians, boast the nation’s economy through massive production of local contents, and lift many out of poverty, is nearing completion.
Located very close to ABUAD in Ado-Ekiti, thousands of unemployed Nigerians, both youths and middle aged, are eagerly awaiting the official opening of this park which provides the golden opportunity for them to quit poverty and embrace a prosperous life. For this people, their prayer is always that Baba Aare Afe Babalola shall continue to live much longer, in sound health and spiritual well being so that the Almighty will continue to bless humanity through him. This is why we use this opportunity to hail this rare gem and great gift to humanity, Aare Emmanuel Afe Babalola. Kabiyesi.o!, Samo said.