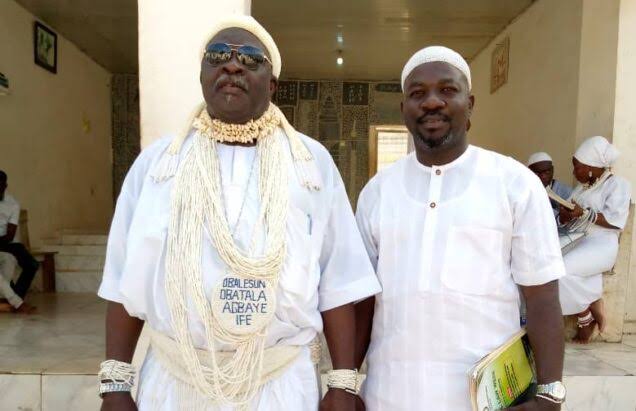 The Obalesu Obatala Agbaye, HDG Olaolu Dada, has said that the set-up group “Irorun Ile-Kaaro-o-o-jiire” would utilise their spiritual powers to ensure adequate security for Nigerians.

Dada made the promise during the Press Conference at Obatala Temple, Igbotapa Area, on Saturday, in Ile-Ife.

He said that in Nigeria, rising insecurity is the order of the day, adding that no day passed without reports of kidnapping, banditry, robbery, insecurity, Fulani herdsmen.

“Enough is enough, people cannot travel safely any longer, we cannot sleep with our two eyes, killing, rituals, terrorist, kidnapping, herdsmen did not allow us to have enough rest.

“Our forefathers power existed before Nigeria received independence, but it was a pity that foreigners came with their religious deceit to deceived us and set those powers on fire,while threw some into lagoons.

“But I want to assured you that the power still remain the same and we are ready to use it to deliver ourselves and our people at large” he ascertained.

According to him, the association would collaborate with other security agencies to provide necessary way out of all these challenges facing.

The Obalesu Obatala stressed that the group has nothing to do with politics nor Yoruba nation agitation, but rise up to fight criminality on the land without gun and Cutlasses.

In the same vein, the group traditional secretary, Barr. Dotun Hassan, said that the group stands for unity, peace and tranquility of Christian, Muslim and traditionalists.

Hassan adding that the group would promote culture and tradition of Yorubas so as to take it to it’s promise Land and would ensure stability of democracy in Nigeria.

He urged Southwest governors, Federal Government, Royal Fathers, stakeholders, philantropist, traditionalists, to support them, charged all hands must to be on deck to profern solution to the mayhem..

Also, the Director of Protocol of the Organisation, Dr Adebayo Olusegun
explained that they want to use the spiritual powers to secure lives and property of Yorubaland and the entire nation.

He adding that they would use the spiritual power to stop crime in Nigeria, for they cannot condone criminality anymore in this nation, assured that they are not politically oriented, neither be thuggs.

Additionally, the Director, Research & Documentary, Dr Segun Awogbemi, expressed that the group is not meant for Yoruba race alone, but for Nigerian citizenry.

Awogbemi emphasised that Fulani had been living peaceful with other tribes especially in Southwest without formetting any trouble in the past, now wondering with how they are going about with amunition.

He maintained that Fulani that came from Nijeh for political election were behind the atrocities on ground after much investigation, called for security support from Fulani Bororo so as to jointly fishes out the evils one amidst originality, saying a tree cannot make a forest.

The Deputy Press Secretary, Yeye Adunni Lawal, said that Yoruba have enough power to tackle any problem, saying that
the group would not face the challenges with amunition, but will fight the battle with their forefathers spiritual weapons.