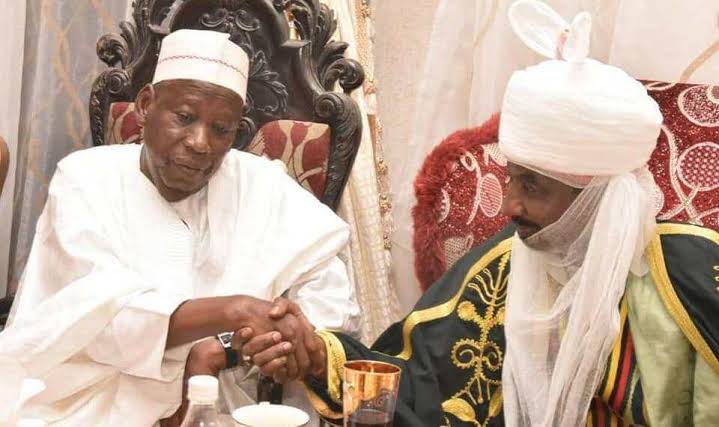 This will be the first time that both men would be seen together since Ganduje dethroned Sanusi in 2020.

In a short clip capturing their meeting, the former Emir and Ganduje could be seen shaking hands at a lounge in the airport as the latter grinned.

Ganduje had removed the monarch on March 9, 2020, over what he described as “total disrespect to lawful instructions from the office of the governor”.

Sanusi was also banished from Kano and sent to Loko, a remote community in Nasarawa State, while the expenses of the emirate under him were probed. One year later, the governor said he took the decision to save the system and the traditional institution from abuse.

Jonathan had in April 2014 removed Sanusi as governor of the Central Bank of Nigeria (CBN) over claims by the ex-CBN governor that $49 billion was stolen by some persons under the Jonathan administration.

Faulting Sanusi’s public outburst over the alleged fraud, Ganduje said the ex-CBN governor ought to have discussed the matter privately with the former president who in turn could have directed an investigation into the allegation.

“Jonathan took a bold step in [removing] Sanusi as CBN governor, which created bad blood in certain circles.
“When Sanusi said $49 billion was lost in Jonathan’s government, I said in my mind that no, you could have discussed with him (Jonathan) privately.

“You could have given him this clue and then he would know how to investigate even before those who had stolen the money would find a way of hiding the money.

“That statement, I said in my mind was not honourable. That statement created bad blood… Sanusi was appointed Emir of Kano not because he was the best man for the throne but to retaliate what Jonathan did to him.

“That was in order to prove that what Jonathan did to him was wrong and that the people of Kano wanted their son as emir and, therefore, they decided to appoint him as emir. But when he was appointed, there were a lot of demonstrations with people burning tyres here and there. But because of government backing, he was sustained on the stool.

“When I became governor, (that’s why you will laugh), I said yes, Jonathan medicine is an important medicine.
“That medicine, even though I am not a medical doctor, but that medicine would serve the same purpose, for the same disease and for the same patient.

“So I took my Jonathan medicine and decided to save the system, to save the institution and I applied it effectively. So Jonathan and I are on the same page. Actually, I have no regrets.”