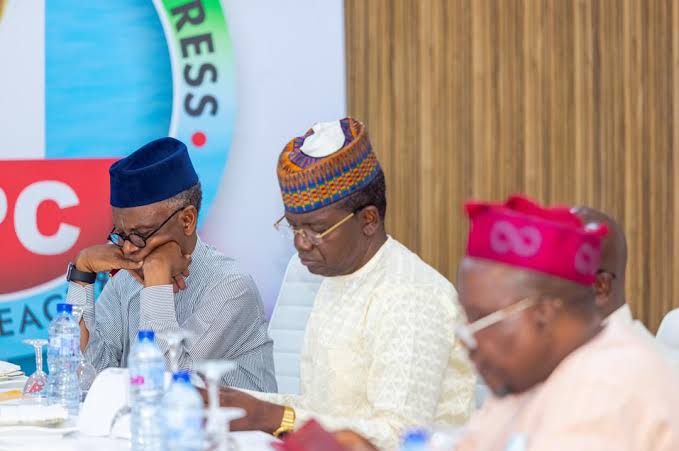 Simon Lalong, Governor of Plateau State has been tasked with coordinating the presidential campaign council of the ruling All Progressives Congress (APC) as Director-General (DG) subject to ratification by President Muhammadu Buhari.

He will be assisted in the role by former Edo State Governor and ex-National Chairman of the APC, Comrade Adams Oshiomhole.
The duo were settled on by the APC presidential candidate, Asiwaju Bola Ahmed Tinubu; his running mate, Senator Kashim Shettima; and APC governors after a meeting in Abuja on Tuesday, August 3.

This was confirmed by Kaduna State Governor, Malam Nasir el-Rufai to journalist after the meeting.
The governor said President Buhari and National Chairman of the APC, Dr. Abdullahi Adamu, would be briefed before a formal announcement.

“This is a delegation of the Progressive Governors Forum, led by our chairman, Dr Atiku Bagudu, and the party represented by the national secretary.

“We came to report on an assignment given to us by our presidential candidate, Asiwaju Bola Ahmed Tinubu, and his running mate to begin the broad consultations and develop a structure for the presidential campaign council. We have done some work on it.

“We have briefed the candidate and his running mate and inputs have been taken and our hope is that in the shortest possible time, the candidate will consult more with the party leadership and brief Mr President and get his input and then we formally unveil the presidential campaign council.

“A decision has been taken on the director-general but other positions in the campaign council are still being discussed. The president and the national chairman and National Working Committee will be briefed before a formal announcement,” el-Rufai said.

Adams Oshiomhole had earlier denired reports he was appointed as the director-general of the APC presidential campaign council after journalists posed the questions to him.

A top party source told Vanguard yesterday that Governor Simon Lalong is the choice of the governors for campaign council D-G, with Oshiomhole as his deputy.

One of those earlier mentioned in connection with the D-G position was Governor el-Rufai.
In the opposition PDP, crises stemming from the presidential primaries and nomination of running mate has paused efforts to raise a campaign council.