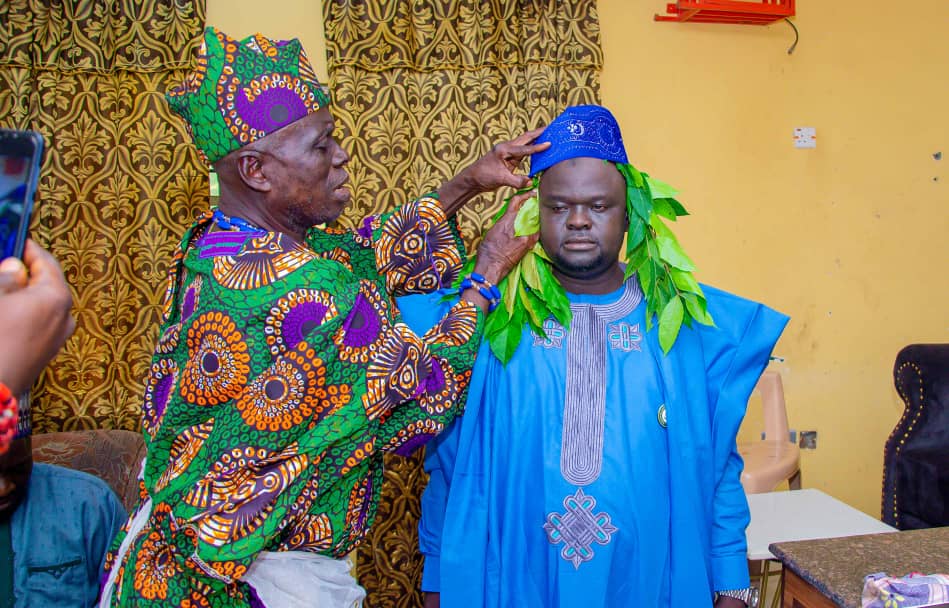 The Olobaagun of Obaagun, Oba Jimoh Adebisi Okunade, Kayode the second, had on Monday, the 8th of August, 2022 installed one of the indigenes of the community and an Abuja based legal practitioner, Barrister Dauda Ajadosu as the new Eesa of Obaagun.
By traditional hierarchy, he becomes the next in command to the Olobaagun as well as the head of the Kingmakers in the ancient town.

Performing the installation in his palace , Oba Okunade noted that Barrister Ajadosu who hails from Eesa Oniayowo compound of the town emerged the new traditional chief after following due process of chieftaincy law governing the stool, thorough investigation into his past and present
antecedents coupled with his track records of always being interested in anything developmental for the town .
It was also gathered that his appointment and subsequent installation followed the demise of the immediate past High chief Eesa Olawuyi Olagunju from Mamoje’s compound who died recently.
In his remarks at the brief installation event, the monarch called on the people of the community to support the new chief just as he expressed confidence in his ability to fast track socio economic development to the ancient community using his education, exposure and wealth of experiences in and outside his professional background as a legal practitioner of note in Abuja where he is currently based.

Oba Okunade maintained that the community is desirous of having young minds as Chiefs in the ancient town, just like the new Eesa, stressing that such will be a catalyst to fast tracking growth and development for the ancient town.
The monarch in his royal blessings prayed to God to assist the new Eesa with the necessary knowledge, wisdom and understanding coupled with good health and long life to carry out his new assignments .

In his remarks shortly after he was symbolically decorated with the famous Akoko/Iyeye leaves by High Chief Kehinde Adeyemi, the Odofin of Obaagun land, the new Eesa pledged total loyalty to God and the people for the honour and recognition bestowed on him. He particularly thanked the Olobaagun of Obaagun, his chiefs and the entire indigenes of the town for the honour and privilege which he described as a call to serve not only the good people of Obaagun land but humanity as a whole.

Describing the title as a great challenge for him to do more, High Chief Ajadosu sought the love and support of the people for the necessary guidance just as he pledged his resolve and commitment to bring his wealth of experience in and outside the legal profession to bear at all times in the course of carrying out his new found position as the Eesa .

Chief Ajadosu also used the opportunity to specifically call on the youths of the town and its elders to make the growth and development of Obaagun their first priority at home and Diaspora.
In attendance were the members of the Olobaagun in Council among whom were the Ojomu, High Chief Mustapha Ayanbanji, the Aro of Obaagun, High Chief Osuolale Olaniyi, the Olukotun of Obaagun, Chief Ahmed Bello among others including elders, leaders and members of Eesa Oniayowo compound where the new High Chief Eesa hails from.