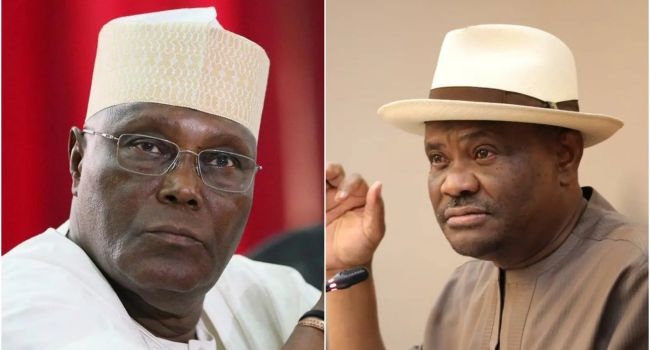 There are fears in the Peoples Democratic Party (PDP) that the ongoing attempt to reconcile its presidential candidate, Atiku Abubukar and Governor Nyseom Wike of Rivers State may not yield results as the governor, once again, jetted out of the country for another strategy meeting with his supporters.

Wike was said to have left for France on Sunday night along with Governors Sam Ortom (Benue), Seyi Makinde (Oyo), Okezie Ikpeazu (Abia) and Ifeanyi Ugwuanyi (Enugu). It is the second of such trip within a few weeks.

According to the report they were expected to leave France for the United Kingdom (UK) after a round of meeting before returning to the country tomorrow.

Party stakeholders are worried that the Wike group may be working to ensure the defeat of the presidential candidate of PDP, despite the current effort to resolve the differences existing between them.

Wike is said to be insisting that the national chairman of the PDP, Dr Iyorchia Ayu, should step down.

However, the party boss has continued to rebuff all entreaties to make him to vacate his seat. Sources revealed that Wike is blaming Governor Ortom for signing an undertaking of good behaviour for Ayu, which he believes that the national chairman has violated with his alleged bias towards Atiku.

“It is because of Ayu this matter is dragging. Wike wants him to step down but because he thinks he has acquired the means since coming into office, he does not want to listen to anyone again,” a top party source told the Nigerian Tribune on Tuesday.

A section of the party has been pressing for the adherence to the constitutional provision on the zoning of offices which prescribes that the national chairman and the presidential candidate cannot belong to the same region of the country.

Both Atiku and Ayu are from the same northern zone. There were speculation on Tuesday that Wike and his group may also have a meeting with the presidential candidate of the All Progressives Congress, Senator Bola Tinubu, during the France trip.

A source said such meeting could provide both sides the opportunity for negotiation over the 2023 presidential polls. However, the meeting with Tinubu could not be confirmed at the time of this report.