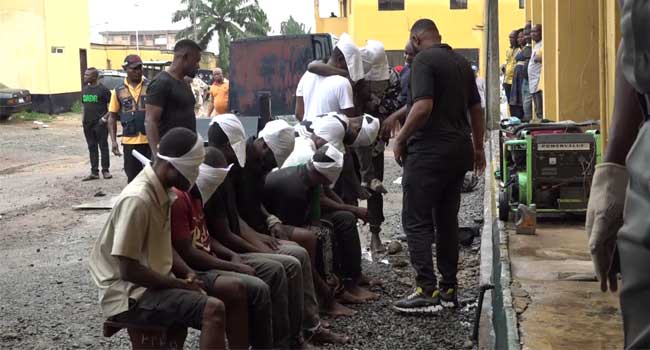 Ten suspects including a dismissed operative of the Department of State Services (DSS) have been arrested for robbing a bullion van in Abia State.

The Commissioner of Police in the state, Janet Agebe, disclosed this on Monday in a press conference in Umuahia, identifying the ex-DSS operative as Prosper Israel from Abia State.

Israel was paraded on Monday alongside nine other suspects at the Police Headquarters in the state capital two months after the robbery.

Channels Television gathered that the suspects were part of the 14-man robbery gang that ambushed a bullion van near Ntigha Junction of the Enugu-Port Harcourt expressway, on July 26, 2022.

The police commissioner stated that during the robbery, the cash officer of a new generation bank was killed on the spot, while the suspects carted an unspecified amount of cash being conveyed by the bullion van.

According to her, the arrest was the reward for months of painstaking efforts and investigation by police operatives.

“We carefully studied their modus operandi and set up a special intelligence technologically-led Investigative Squad, ITLIS, with a clear directive to arrest and recover weapons used by the deadly armed robbery gang,” the CP said.

Others were Azubuike Amaefula a.k.a Zubby from Abia, and Monday Samuel (second armourer) from Delta but resident in Ondo State.

Others were two improvised explosives dynamites; a Mercedes Benz mini truck used in concealing firearms; and cash of N10, 184,000.

The police boss stated that the suspects during interrogation confessed that they placed the bullion van on surveillance for two months.

She added that efforts were on to trail three other members of the gang still at large, pleading with members of the public to always volunteer information about suspected criminals around them.

The suspects, the CP noted, would be arraigned in court after further investigations.