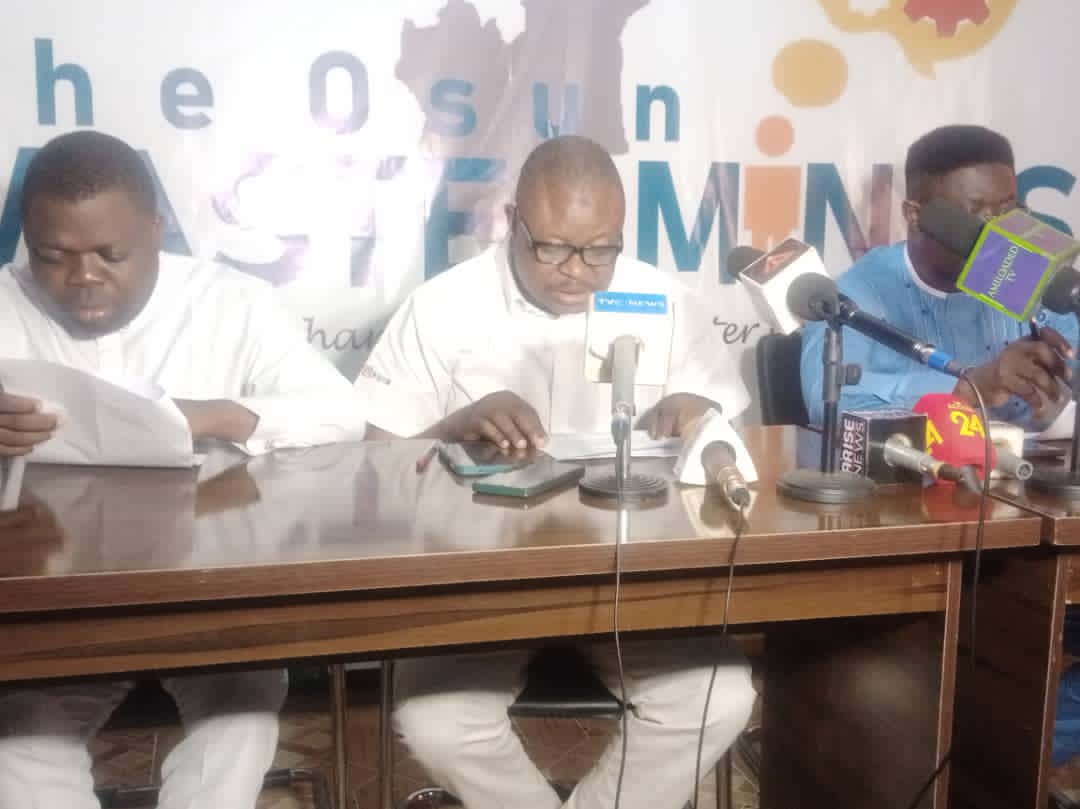 An Osun based Social-Political group, The Osun Masterminds (TOM), has endorsed the proposed local government elections slated for October 15, 2022.

Addressing journalists in Osogbo, the state capital, the Executive Director of the group, Dr. Wasiu Oyedokun-Alli said the election is long overdue noting “We therefore endorse the proposed Local Government election, provided it is conducted with full respect to the rule of law and regard for the rights of every party involved”. The group said OSSIEC must not only ensure a free, fair and credible election, it must also posture as doing so.

Part of the statement reads, “We have keenly followed issues surrounding the proposed conduct of the Local Government election by Osun State Independent Electoral Commission (OSSIEC). We are aware of the Court process instituted by the Peoples Democratic Party against the conduct of the election and we understand the fears of persons who think the timing of the election is wrong and must thus be terminated.

“It must be stated that all the parties concerned – OSSIEC, the ruling All Progressives Congress, the Peoples Democratic Party and other participating political parties – are important stakeholders in the process of electing heads for our Local Governments. As such, they all have rights within the provisions of our extant laws, to air their opinions and seek redress from the appropriate organs of government.

“While exercising rights however, we do understand that each of the concerned parties, must stay focused on the real issues that will define governance and ensure that citizens of the State enjoy the benefits therein. First, we must state that the election of Local Government Chairmen and Councillors is long overdue and should have come way earlier than the present time.

“The people of the State at the grassroots continue getting shortchanged through the absence of elected heads of Local Governments who can truly deliver governance at that level. Understanding however that it is never too late to do the right thing, we believe that the conduct of the Local Government election is a step in the right direction, despite being late.

“The commission must not be seen as doing the bidding of any of the political parties or stakeholders involved in the election. Utterances, posturing, engagements and conducts of the commission must reflect transparency and true democratic ideals, understanding that it is an independent commission that is expected to be fair to all.

The group however enjoined political parties to perceive the election as a critical democratic process that will deepen governance and thus, all political parties with presence in the State, should endeavor to participate. “It must be said, that allegations of foul play in the absence of any act thus describable, amounts to blackmail and political manipulation.”

“For as long as OSSIEC reassures the parties concerned, the commission must not be accused of foul play when it does not posture in such light. Fourth, the ruling party is advised to ensure that it does not deploy the machinery of State to thwart the freewill of the Electorates. While having influential links over several arms of society at present, it must not use these links to dictate the direction of election as doing this will render useless, the supposed intention of deepening democracy.

On the Tribunal proceedings, the group said supporters of the two major parties to the petition before the tribunal – the Peoples Democratic Party and the All Progressives Congress – have gone about town misleading and misinforming unsuspecting members of the public with information about the goings-on at the Tribunal that are not just false, but are also subjudice.

“We know that the country’s justice system has evolved over the years and can therefore be relied upon to deliver justice in the matter. Parties are therefore counseled to allow the Tribunal do its job without the reckless misinformation going on social media. We must also advise parties to the petition, to rein in their party members and ensure that while the brickbats go on at the tribunal, there is no breakdown of law and order within the society.

“We cannot allow a Court process disrupt the relative peace that Osun has been known for in the comity of States.Power belongs to God and He dispenses of it as He so pleases.

The group commends the commitment of Governor Gboyega Oyetola to the continuity of governance. “It is impressive that despite the outcome of the last election, he has stayed committed to the delivery of dividends of democracy to the people of the State.We want to encourage him to continue on this path, as it is the ethical thing to do to ensure the sustenance of our growing democracy.

On the PDP transition committee, the said they have keenly followed the activities of the Committee and are aware of its ongoing engagement of consultants, who are giving the committee briefs and insights into what the approach to governance should be when the PDP gets to power.

The group stated that havey have seen unfortunately, the engagement of certain persons under whose superintendency over the State’s affairs, the economy was plunged into non-sustainability and near-irredeemable indebtedness. “We strongly advise the committee, to avoid receiving supposedly progressive ideas from persons or groups of persons who got the State into the present economic quagmire that it is in.

“We do not as a group, have any axe to grind with any person or groups of persons, but we must in the best interest of our dear State, give timely counsel when we see critical stakeholders making avoidable mistakes.

“The Transition Committee’s decision to inaugurate a Youth liaison committee stands commended. We however advise the committee to ensure that it engages all critical stakeholders in the Youth community, with a view to developing workable youth strategies that the new government can run with when it comes into power.

The group avowed to continue to advocate for good governance, ethical politics and responsible citizenship in Osun State that they believe that the steadfastness and commitment to these ideals is a duty that they owe Osun State and that they will continue to discharge it.

The Osun Masterminds is a group committed to advancing the tenets of accountability, transparency and overall good governance in the affairs of Osun State.