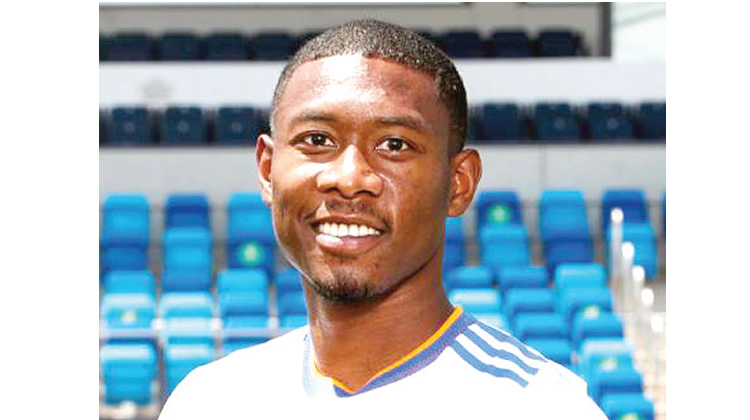 Several Nigerians have taken to social media to commend Real Madrid star David Alaba after the Chairman, Nigerians in Diaspora Commission, Abike Dabiri-Erewa, through her Twitter handle on Saturday, stated that the player had donated mobile toilets to Ogere Remo community in Ogun State.

Alaba was born in Vienna, Austria to a Nigerian father George and Filipino mother Gina but represents Austria at senior international level.

Despite not playing for Nigeria, the footballer, through the David Alaba Foundation, in December 2021, donated N13.3m to build toilets in Nigeria.

The toilets were unveiled Friday, with the distribution of autographed Real Madrid jerseys to three successful winners by the David Alaba Foundation.

Reacting to the kind gesture by the footballer, some Nigerians took to Twitter to applaud the Madrid star.

Bayo Adedosu wrote, “Despite not donning the Super Eagles jersey, he’s heart is fully with Nigeria. God bless you.

“@David_Alaba, you are a role model in country where we have elements who deliberately work against their own country.”

Dako Enaike added, “David Alaba making more ‘moves’ in ‘90mins’ than FGN has made regarding open defecation in a life time. Shouldn’t have put those two together, give kudos to whom kudos is due alone.”

With the player also expected to launch a football centre in Nigeria, Akanbi added, “Congratulations for all you do, we looking forward to the football training centre.”

Also eulogising the left-back, Ibrahim Agaie tweeted, “Thank you Alaba for adding value to your root. Don’t mind the negative comments coming from those angry folks, the only time they expect something from the country is when they are found guilty of a high profile crime elsewhere.”

The real David who love his country and doing the best he can to help move the country forward… No matter how some people tried to bring Nigeria down, God will lift Nigeria higher above them,” Prince_Demlac wrote.

Bolaji simply wrote, “Kudos to him. He should keep doing the great things for Nigerians….  Hala Madrid.”

He wrote, “Thank you David and more Blessing IJN. Thank you also Madam Abike for making sure this came to past.”

Echoing the voice of Klinsmann, Chukwuebuka Onwubuariri added, “This is highly commendable. Thank you David Alaba for your kind gesture and also thank you @abikedabiri for updating Nigerians. Keep us your good work at diaspora commissions…. I sincerely appreciate it.”

Also appreciating the Austrian-born player, Sulayamusa said, “This is massive and huge, thanks so much @David_Alaba. Your fatherland will never forget you.”

Don Olu’williams added, “Thank you my man David, your gesture is well received with thanks of millions of Ijebu people and Nigerians at large. Don’t mind the negative comments.”