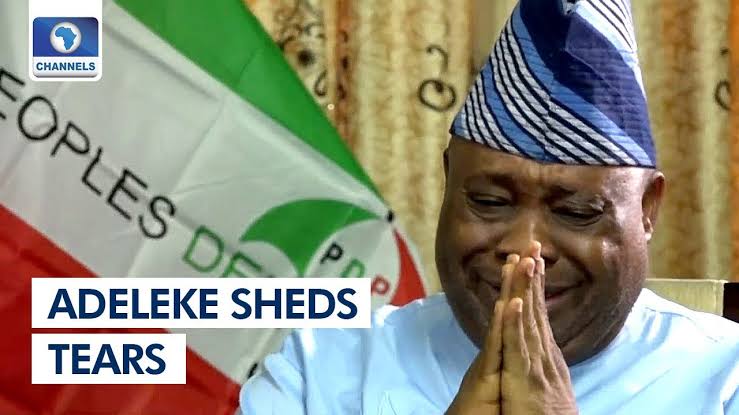 Information reaching me suggests that Sen. Ademola Adeleke is trying to wrap his head round the many raging troubles ahead of November 27.

Information from another reliable source says he is billed to travel abroad any time soon to get his mental state examined. He is unable to come to terms with the avalanche of hurdles before him. He has certificate forgery allegation hanging on his neck. He is yet to explain how he came about a degree certificate in less than 30 days. He is being dragged to court by the APC candidate in the July 16 election. While struggling with this load of litigation, his fellow party man, Dotun Babayemi, has dragged him before the Supreme Court to get the Court to rule that he is not qualified to stand for the election, as he was allegedly elected a candidate by fake delegates.

At the beginning, the Adeleke family called the bluff of all party leaders who opposed to their son, believing money ‘answereth’ all political issues. But with the turn of events, they have suddenly realised they need the people on their side. However, their efforts appear too late, too late, and unless miracle happens, they will pay dearly for it.

They were approached for amicable settlement of the issue. They refused. Babayemi is now at the Supreme Court, challenging the primary that produced Adeleke.

I have read several submissions on the matter, with some arguing that Babayemi has no locus standi to file the matter in the first instance. But those who argue along this line forget that part of Babayemi’s arguments is that the primary that produced Adeleke ought not to have taken place in the first instance since the delegates who converged on that venue were not known to law. Therefore, if we go by the popular axiom, ‘you can’t build something on nothing’, then, issue of locus does not arise.

Like Barrister Ojo Williams, lawyer to Babayemi said, what Prince Dotun Babayemi is doing has the backing of the majority of the leaders of the party in Osun.

According to him: “The whole issues started before the election came. Don’t forget that the issues were: We had two aspirants claiming to be the candidates of the party simply because there were two parallel congresses. One was held at the Osogbo City Stadium and the other one was held at WOCDIF centre also in Osogbo. One was attended by the PDP State Acting Chairman to preside over it and the other one was not.

“And when you look at the Constitution of the PDP, Section 25 specifically, it tells you who presides on a State Congress. The State Congress is where the Chairman presides to elect who becomes the flag-bearer of the party in a Governorship Election. That is the major function. Without the chairman in place, you can’t have the State Congress. The question is that, who will direct the affair where there is no chairman?

“So, those were the contending issues long before the election came, and then, the matter was taken to the High Court before the election came. The High Court in its wisdom said no, you have the correct number of delegates but the venue where you held your Congress was wrong and those who held theirs at the Stadium had wrong delegates. And if you had the wrong delegates, it means you cannot even anoint anybody as the candidate or flag-bearer of the party.

“But because they said officials of the National Secretariat of the party came to their Congress, their Congress is authentic even though they had wrong delegates and they had no party chairman at all. And under the party Constitution, chairman is supposed to preside over the State Congress. So, the Judge delivered the ruling. I was in Court physically. I listened to the thing. There were many grounds for appeal. The Judge even delved into areas that were not canvassed before him.

“It was on that premise that Prince Dotun Babayemi said he has not gotten justice and headed to Supreme Court.

“Don’t forget, the National leaders of the party led by the Presidential Candidate, Atiku Abubakar and Vice Presidential Candidate, Governor Okowa, came to Osun and called the leaders in the state, majority of which were supporting Prince Dotun Babayemi. They said they don’t want to dabble in legal issue but the party members should for God’s sake go and vote for the party and that whoever wins in Court takes the benefit, and that they should not allow the conflict to affect the outcome of the election. They said the party must win the election and they must bury the litigation for the time being.

“They were asked to mobilize people to go and vote and when the PDP wins, the rightful candidate will be known. Don’t forget that this had happened before in the case of Amaechi and Omehia.

“Amaechi was there when Omehia was pushed forward as candidate. But Amaechi went to court saying Omehia was never the candidate of the party and that he was the candidate of the party. So, the matter went from High Court to Court of Appeal and Supreme Court and at the end of the day, Supreme Court said Amaechi is the rightful candidate even though he didn’t paste one poster. This came after Omehia had spent six to seven months in government He was asked to step aside.

“The Supreme Court and all the Judges are there as neutral arbiters. They don’t look at face of something, they look at the facts and they give you the position of the law. Whether it is going to be the case of Diri outcome of Bayelsa or Amaechi outcome of Rivers doesn’t concern me. The court for the time being is concerned with justice.

“What to be looked at is that were the Congresses held in Osun legal or not? That is the first point of view. Secondly, which of the two Congresses was legal to determine the winner of the Congresses?”

As we await the decision of the Supreme Court, we pray justice is done in this matter.