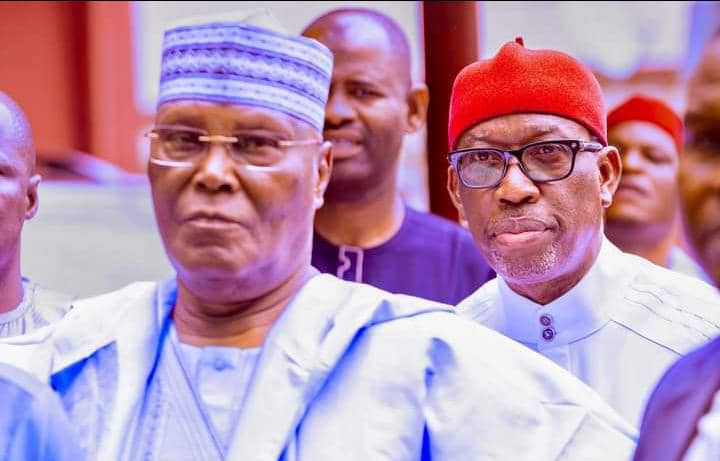 The PDP has been in turmoil since Atiku was elected as the standard bearer of the major opposition party.

The rift deepened after Nyesom Wike, governor of Rivers state, was overlooked by Atiku in the selection of his running mate.

The crisis worsened on Tuesday as Wike’s allies jettisoned campaign responsibilities, and insisted that Iyorchia Ayu, the party’s national chairman, must be removed.

Several meetings to resolve the acrimony in the party have been to no avail.

In a statement on Friday, Bayo Onanuga, the Tinubu campaign’s director of media and communication, said the “fratricidal war” within the PDP “has undermined” any momentum Atiku hoped to build.
The statement added that Atiku is facing the “karma of his inordinate ambition” for not heeding the zoning arrangement of his party.
“Let us pity Atiku, another shot at presidency is slipping away. Once again, another bid for the presidency of our country by former Vice President, Atiku Abubakar is slipping away. This is unravelling before our very eyes even before the Independent National Electoral Commission (INEC) blows the whistle for the electioneering campaign. His party, the Peoples Democratic Party (PDP) is in disarray. The signs are just too ominous for the Waziri what with the report by the Economic Intelligence Unit predicting another trashing for him in the forthcoming polls,” the statement reads.

“After violating his party’s code for power rotation between the north and south and grabbing the PDP ticket without a modicum of sensibilities about our national ethos, Alhaji Atiku is now faced with the karma of his inordinate ambition.

“The PDP has imploded in a battle of attrition, the result of which is predictable. The ongoing fratricidal war where a faction of the party being led by the Rivers State Governor Nyesom Wike is engaging Atiku in a fight to finish has undermined any momentum the PDP candidate had hoped to build. With the further loss of confidence in PDP by its own members who can not find any redeeming feature in the fast-disappearing party, it is crystal clear that Atiku’s latest bid for the Nigeria’s top job has hit the rocks.

“A pillar of Atiku’s campaign is the claim of being a unifier and nationalist. That bogus claim has now been discredited, even within his party as the disaffected members cry for justice and inclusivity.

“Instead of the perennially running and perennially failing candidate to offer them some sop, he has rebuffed them, pleading that he could not grant their request for justice.

“Surely a man who cannot resolve a genuine dispute among his party members, who cannot forge an entente among them, cannot be expected to unify our country.

“Instead of being a unifier, Atiku is now a divider-in-chief. His campaign on this score is heading for a stillbirth, just as some of his programmes have been found to be nothing new, as they are already being implemented by the All Progressives Congress (APC) administration of President Muhammadu Buhari.

“The former Vice President created the crisis for himself, by pushing the fallacy that only a northern candidate can win the presidency for his party, despite the open record that southerners, when they network with their northern compatriots, can also win the election.

“Former leaders, Chief Olusegun Obasanjo and Dr. Goodluck Jonathan demonstrated this in 1999, 2003 and 2011. As a campaign, we can only pity former Vice President Atiku for the self-inflicted injury he invited unto himself. Chinua Achebe, the very accomplished novelist in one of his classics, Arrow of God, wrote that a man who brought ant-infested faggots into the homestead should not grumble when lizards begin to pay him a visit.”