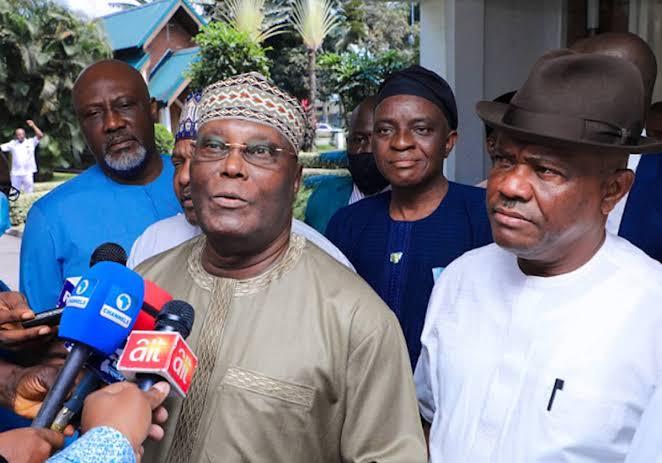 The three aggrieved governors had similarly boycotted the inauguration of the campaign council at the Conference Centre, Abuja on September 28 along with their two colleagues – Ifeanyi Ugwuanyi (Enugu) and Okezie Ikepeazu (Abia).

Also on Sunday, October 9, Ortom said he would not succumb to intimidation and blackmail by supporters of PDP national chairman Senator Iyorchia Ayu, who hails from Benue state.

He maintained that since the chairman had promised to resign, if a northerner emerged, he should fulfill his promise.

The governors have insisted that Ayu should quit to pave the way for a Southerner in the spirit of equity, justice and fairness.

Many have tagged the administration of President Muhammadu Buhari as a total failure because of the persistent insecurity and rising inflation, which has made the pockets go dry and subject the bellies to hunger, but karma seemed to be on his side and his party ahead of the general election.

The insecurity and inflation have swept Buhari’s landmark achievements in infrastructure and agriculture under the rug, influencing the retired general’s comment that those who are supposed to talk about his achievements are not doing so.

The largest opposition, Peoples Democratic Party (PDP), which is meant to seize the opportunity on the ground and hijack the power from the All Progressives Congress (APC), decided to play the tribal game and jeopardised the hope of southerners taking over from Buhari.

Legit.ng earlier reported that the PDP said it has assembled lawyers to look into the decision of a federal high court that nullified the party’s governorship primaries in Zamfara

The umbrella party said it has accepted the court’s judgment, but its lawyers would determine the next action to the taken

Justice Aminu Bappa-Aliyu, in a 109 pages document, nullified the primaries and ordered the PDP to conduct another primary immediately