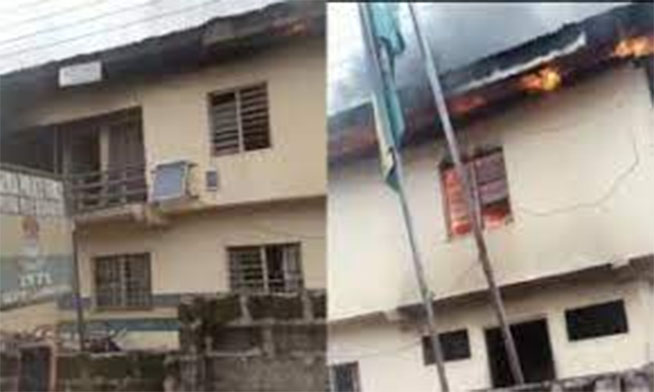 No fewer than six security opera­tives which com­prising four sol­diers and two policemen were killed by gunmen in Enugu State.

Our correspondent gathered that the two sep­arate attacks occurred at Oji River Local Govern­ment Area in the state.

Checks revealed that attack on the Inyi Po­lice Station in Orji River LGA where two police­men and two civilians were killed occurred on Sunday while the attack on soldiers occurred on Monday during sit-at-home being observed by the people of South East.

It was further learnt that the gunmen who stormed the station Sun­day morning also set the police station on fire.

An Eye witness ac­count said the gunmen were chanting, “No elec­tion and Police in Biafra land.”

One of the two people killed was said to be a po­lice officer on duty when the hoodlums attacked the station.

A viral video of the incident circulating on social media shows a building being used as a police station on fire and the bodies of two young men lying by the perim­eter fence of the station.

Meanwhile, Monday at­tack on soldiers occurred at Iyiachi in Oji River Local Government Area during the sit-at-home be­ing observed by residents of the South East states on Monday.