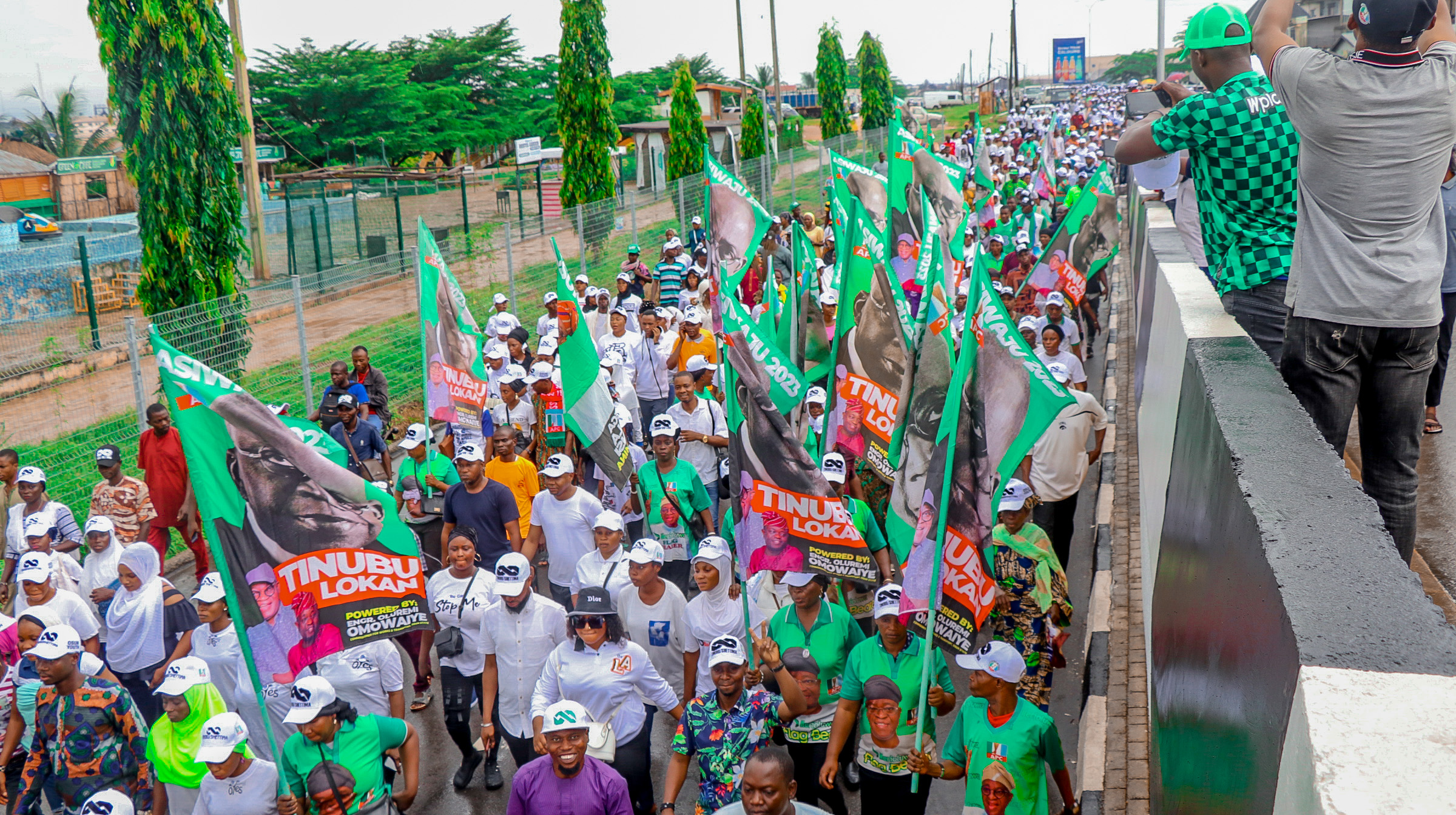 As part of efforts to ensure victory for the ruling All Progressives Congress (APC) in the 2023 Presidential Election, the Osun Youth Wing of the party on Thursday stormed major streets of Osogbo to rally support for the party’s Presidential Candidate, Asiwaju Bola Ahmed Tinubu and his running mate, Senator Kashim Shettima.

The ecstatic youths, in their thousands, matched and sang solidarity and victory songs to register their unalloyed support for the party and candidature of Tinubu.

This is even as Governor Adegboyega Oyetola reaffirmed his confidence in the judiciary to reclaim his mandate, saying there’s no doubting the fact that he won the election.

According to the youths, the solidarity rally was part of efforts to re-energise, reinforce and reawaken the consciousness in the youths, particularly loyalists of the party as general elections approach.

Addressing the youths shortly after the termination of the Solidarity Walk at the newly-built Ileri-Oluwa Campaign Office, Ogo-Oluwa Area, Governor Oyetola assured the people of the State of his absolute confidence in the judiciary to retrieve his stolen mandate.

Oyetola, who commended the youths for their courage, said that the outcome of the recently- conducted governorship election was a clear indication that he won the election and ever-committed to reclaim his mandate.

He expressed gratitude to the people of the State, particularly the loyalists of the party most importantly the Youth Wing for their continued support all along, just as he urged them to remain resolute and faithful in God as necessary steps had been taken within the ambit of the law to retrieve the mandate willingly given to him.

“I just want you to put your mind at rest. I will reclaim my mandate. My mandate is intact. I have absolute confidence in the Judiciary and by the Grace of God, I will be returned elected to govern the State for another four years.

“I am highly impressed with what I have been seeing before getting here. I am happy as well that you came out in large number to rally support for our very own Asiwaju Bola Ahmed Tinubu. There is no doubt that Asiwaju remains the best among the contestants. He is a man of unbeatable tract records. As we all know, he did well in Lagos. There are lot of things to attribute to him as his achievements.

“It is on record that his indelible legacies live on as he set the State on the pedestal of sustainability and prosperity. God used him to turn around the economy of Lagos. A lot of pro-masses institutions and agencies were launched during his tenure and these are still very much alive to the use and goodness of the people of Lagos in particular and Nigerians at large.

“He has set agenda for the progress of Lagos and I am confident that this will be replicated at the centre when he becomes President. He has done a lot and he is ready to do more. As productive and energetic youths, it is our belief that the scourge of unemployment and other related vices will be a thing of the past as soon as he resumes office.

“So, Osun is critical to our party. If you talk of progressive party in Nigeria, Osun is key, and as such, it is incumbent on us to do everything possible to return 1.2million votes for our presidential candidate.

“I commend your courage for not allowing rain to stall this peaceful rally. I have seen about 5 thousand youths. It is an indication that Osun is for Asiwaju and I want those who have not got their Permanent Voter Cards to go and do so. They have commenced reregistration for those without PVCs. This is another opportunity to get one. Don’t be deceived by the antics of the opposition. God is with us and by His ultimate Grace, our mandate will be reclaimed”, Oyetola said.

In his remarks, the State Chairman of the All Progressives Congress (APC), Prince Gboyega Famodun, lauded the ‘can-do and ever-resilient spirit’ of the loyalists of the party, particularly the Youth Wing.

He expressed confidence in God and the strength of the party to ensure all- round victory for Asiwaju Bola Ahmed Tinubu and his running mate, Kashim Shettima, come next year general elections.

“We came out today to show to the entire world that we are solidly behind Asiwaju Bola Ahmed Tinubu. This is a critical period as elections are around the corner and we cannot continue to give our support to leaders that are not for us.

“We have a choice to rally support for Asiwaju Bola Ahmed Tinubu because we believe in his leadership and we know that under his leadership Nigeria will become a better place for us and be prosperous. That is why we came out in large number to register our voice and tell the people of Osun that we are going to mobilize massively for him.

“As you can see, this is another ground-breaking event in the history of our party, and indeed, the State. The solidarity rally was aimed at reawakening the consciousness of our people to the reality on the ground and the need to support, mobilise and vote massively for the presidential candidate of our party, Asiwaju Bola Ahmed Tinubu and his running mate, Senator Kashim Shettima.

“What we have seen today is an indication of the fact that Nigerian youths are solidly behind the candidature of Asiwaju and that they are ready to elect our candidates in the general elections.

“The massive turnout of our people today vis-a-vis the warm reception received from the people in the course of this solidarity rally are clear evidence that our party is loved by all.

“We have come out to once again indicate and register our love for our very own, Asiwaju, whose unprecedented track record speaks volume of the coveted position he is aspiring. We are in no doubt that Tinubu’s aspiration is indeed God’s project and we are firmly ready to support this cause with all our energies and strengths to get him elected.

“We are also letting the people know that regardless of the temporary setback that we have at the governorship election, we are strongly behind Governor Adegboyega Oyetola and we are so confident that we will reclaim our mandate”, Ayantunji added.

Re-echoing the rationale behind the solidarity rally, APC State Youth Leader, Olagoke Akinwemimo, said the seamless solidarity movement has shown to the world that Osun is for Tinubu and Shettima.

Akinwemimo who described the youth as most energetic and ever-committed segment of the party said the large turnout of his colleagues was an indication to the fact that Osun Youths are solidly behind the presidential candidate and his running mate.