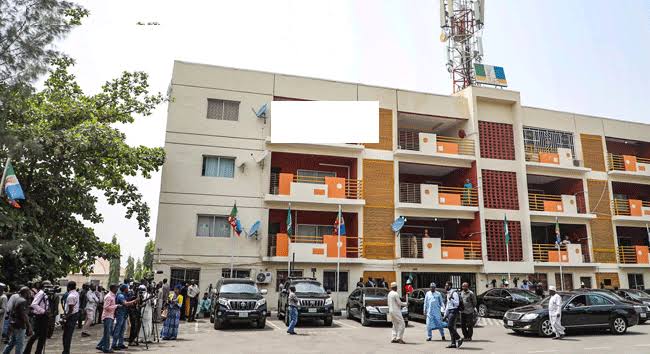 The national secretariat of the All Progressives Congress (APC), boiled in the early hours of Tuesday, when protesters, in hundreds stormed the party, gained entrance into the compound, grounded activities for hours, and insisted on seeing the National Chairman, Abdullahi Adamu.

Not even the intervention of combined personnel of different security agencies that shut and barricaded the main entrance door to the chairman’s office could move the determined protesters from pressing their demands.

Singing and dancing, the protesters, comprising youths, women, men, bearing various inscriptions, had resisted all entreaties from the security agents while demanding for the immediate removal of the FCT chairman of the party, Abdulmalik Usman.

Disrupting free vehicular and human movement inside the secretariat, some of the inscriptions on their posters read: “Oath of office can only be taken twice, APC FCT chairman, Abdul Malik Usman, has taken oath of office twice, it is impunity to keep him, “FCT Congress 2021 must be recognised, “FCT APC chairman must go for refusal to accept the new party executive of FCT!!!, “We say no to party impunity of FCT, “National Chairman APC, do not condone impunity, “APC must not only preach equity and justice but must demonstrate equity and justice, ” among many others.

Bent on accessing the National Chairman, who had arrived at the headquarters shortly before the protesters seized the secretariat, some of them accused him of collecting bribes from certain politicians from the FCT in the Peoples Democratic Party (PDP) to ensure that the opposition party wins FCT again during 2023 election.

“We want to see Adamu. He must stop the impunity by ensuring that Abdulmalik is not sworn in the third time. If he fails to address us it means that he has collected money from the PDP so that APC will lose FCT again in the 2023 elections.”