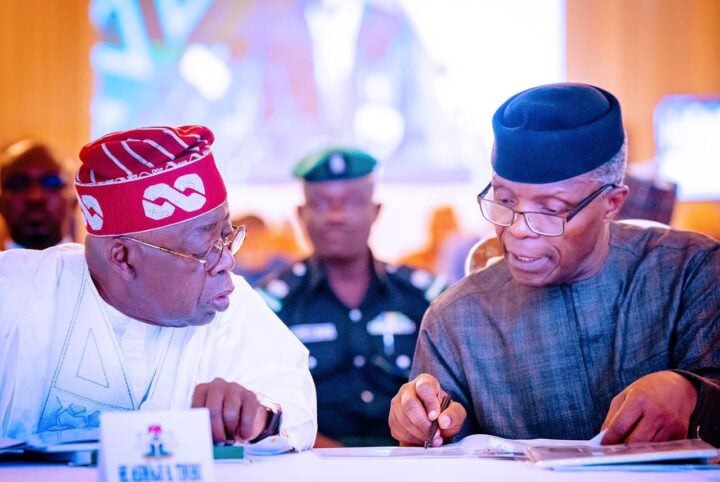 Vice-President Yemi Osinbajo failed to acknowledge Bola Tinubu, the presidential candidate of the All Progressives Congress (APC), at the funeral of Rotimi Akeredolu’s mother.

On Saturday, at the funeral service held at St. Andrew’s Anglican Church in Owo, Osinbajo acknowledged the presence of Kayode Fayemi, former governor of Ekiti, as well as Babajide Sanwo-Olu and Dapo Abiodun, governors of Lagos and Ogun, respectively.

He also recognised the presence of notable politicians and personalities present including, party chieftains, former governors, lawmakers, ministers, senators and captains of industry amongst others.

Shortly into his speech, the former Lagos attorney-general was prompted by his aide, who dropped a piece of paper to remind his boss of the presence of Tinubu, who was actually in the front seat.

“Before I go on, I have made a very big error. I have left out the presidential candidate of our great party, the APC, Asiwaju Bola Ahmed Tinubu,” he said.

The vice-president contested for the APC presidential ticket with Tinubu, but lost the primary election – a development that elicited mixed reactions.

Following his defeat at the primaries, Osinbajo congratulated Tinubu, adding that his experience will contribute positively to Nigeria’s prosperity.

Also speaking to a group in Kano on October 26, Tinubu said he doesn’t have anything against Osinbajo.