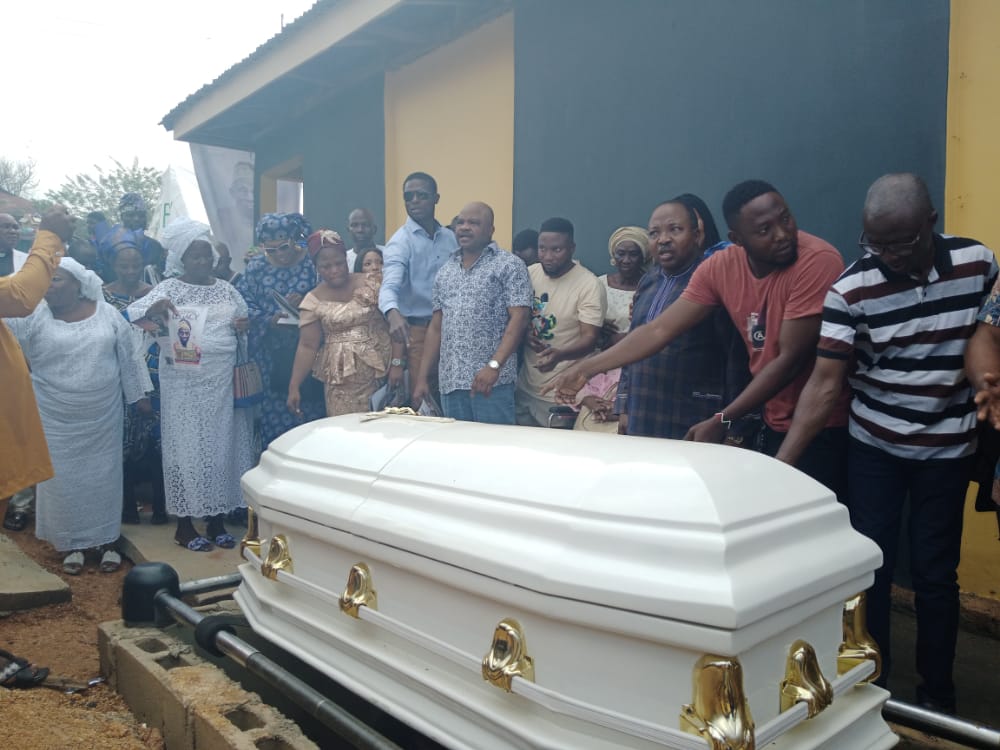 People from all walks of live stormed Ara, in Egbedore Local government of Osun state to bid farewell to Madam Deborah Mopelola Adeniji

Admonishing the congregation at Ebenezer Baptist Church, Ara, former Chairman of Nigerian Baptist Convention in Osun State, Reverend Olumide Kehinde urged Christians to have the fear of God in order to make heaven as the coming of Christ drawth nearer.

He stressed that fear of God is important as no one knows when his Christ will come adding that death can come at any time.

The man of God also advised people to find the habit of celebrating the aged while they are alive and stop the attitude of lavishly spending while they had dead.

Omolaoye who is one of the sons-in-law of deceased noted that mama treated him as a biological son and always prayed for him anytime they spoke on phone.

“About Mama Mopelola Adeniji, though, Mama was not my biological mother but she took me as her biological son. As a matter of fact, I regard myself as one of her sons.

Well, to be honest what ever she discussed with any of her children she felt free to discuss it with me I’m always the first person to be contacted I thank God, God gave her a full-fledged life to live and she lived very well to the glory of God. I appreciate God in her life.

In the same vein, Pastor Kolawole Adeniji, a retired general manager and also the first son of the late deceased described his late mother as a disciplinarian who ensured her children have access to good and quality education.

“She is my mother and I happened to be possibly the mostly loved though initially I hated her because she was too harsh, a disciplinary contrary to the attitudes of my father. When we were young, my father never beat any of us he only says “Oju e wokowoko” in Yoruba but in case of my mother she beat us hand to hand and latter on when we were growing up I discovered that she was doing us a lot of Favour like I said in the church yesterday I would have hated her if my father did not die young at the dismissed of my father she took care of all of us, seven of us.

As a matter of fact, my mummy, mama Adeniji is second to non.

Speaking also about the deceased, the last born of the house described mama as a generous and brave woman who ensured her children get educated despite being illiterate.

“It was devastating for me because I wish that I have the opportunity of seeing her again I’m not in country for some times now am in Australia and I was actually planning to see her next year and it was very painful. my mother is a very generous person I’m happy she is a Christian and also happy she left a very big foot print she gave everyone us her children the best education even though she is not educated but she makes sure everyone of us from the eldest to the youngest is educated I think her commitment to human development is comparable to non her Christian values and virtues is comparable to non she was able to inculcate discipline to us”

Another son of the deceased, Reverend Doctor Julius Adeniji praised her late mum for her impact, moral and virtues imbided on her children.

“Actually, my mother Mama Mopelola Deborah Adeniji is a mother that’s second to non and she is very intelligent, meek, reliable, tolerance and a prayer warrior she is uncomparable she single handedly supports all her children including myself. She is too precious to us.