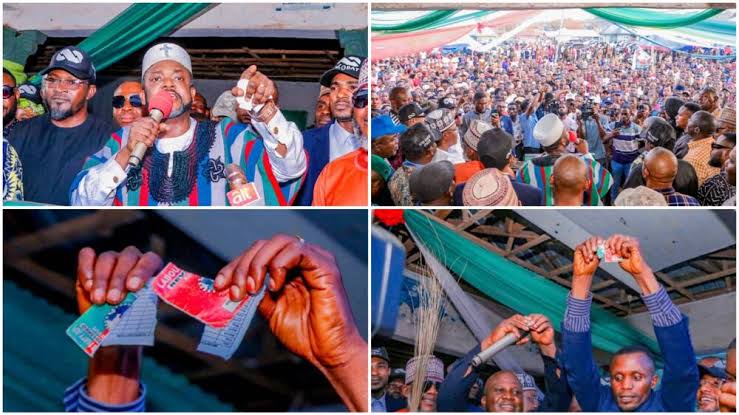 David Ameh, the leader of the Labour Party (LP) in the Olamaboro council area of Kogi state, has defected to the All Progressive Congress (APC) alongside his supporters numbering 2000.

The deputy governor of Kogi state, Edward Onoja, received Ameh and his supporters at a rally held at the Okpo headquarters of the council area, Vanguard reported.

Why I left Labour Party for APC, Ameh reveals Speaking at the rally, Ameh who is said to be the funder and political leader of the Labour Party in the local government, said he was an ‘intense political arch-enemy’ of the Kogi deputy governor.

However, the former LP chieftain said, having sat down and done a comprehensive analysis of the political trends in the country, he has realised that his former party does not have a bright prospect in 2023. Legit.ng notes that Peter Obi, the LP presidential candidate, is one of the leading candidates in the 2023 polls.

“I have realized that the Labour Party was not going to have a meaningful headway in the 2023 polls and I have therefore decided to pitch my tents along with my numerous supporters with the ruling party,” Ameh said.

Kogi deputy governor Onoja reacts In his remarks, the deputy governor said he was happy that the defectors eventually saw the “light of the day”. He said he remained unprovoked in spite of the consistent attacks of Ameh and his supporters against him and the ruling party.

The deputy governor also assured the defectors that Kogi state stands to benefit hugely if the APC presidential candidate, Asiwaju Ahmed Bola Tinubu is elected in 2023

Today on behalf of my boss HE Excellency Alhaji Yahaya Bello, I led Olamaboro APC stakeholders in receiving new members comprising majorly of Labour Party Executives members, PDP and other political parties from across the 10 wards in the Local Government Area. pic.twitter.com/hy6J5VVCw1