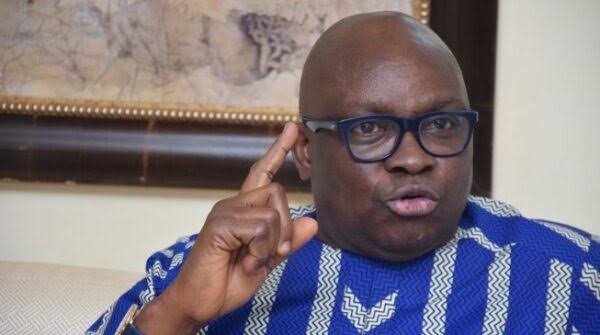 Former Ekiti State Governor, Ayo Fayose, has described those promising victory for the presidential candidate of the Peoples Democratic Party (PDP), Alhaji Atiku Abubakar, in the Yorubaland during the 2023 poll as jesters.

According to the former, Ekiti governor, the South West is already locked-in for a prefered candidate and he didn’t see PDP making any inroad.

“Let me give you an analysis. In the South-West, people might not like to hear that, but I don’t see how PDP will win. Anybody deceiving us can continue to deceive us.

“I don’t see how PDP will win in the South-East. South-South will be a combination of all interests. Let me come to the key states of the north.

“We will give Adamawa state to our party. Don’t forget there is still another Kwankwaso who is a semi-cancer that can equally upstage figures in the Morth”, Fayose noted.

He also warned that the presidential candidate of the Labour Party (LP), Peter Obi, could affect the chances of the PDP in the 2023 polls.

Obi, it would be recalled, had dumped the PDP in May for LP and clinched the party’s presidential ticket.

The participation of Obi in the 2023 presidential election under LP has elicited speculations that the votes of the PDP may be divided in the 2023 election.

Speaking on the development, Fayose said the former Anambra governor may not secure the required 25 percent of votes in two-third of the states to be declared winner.

The former Ekiti governor asked the PDP to negotiate with Obi, and also resolve the crisis in the party by reconciling with the camp of Nyesom Wike, governor of Rivers, in order to win the presidency.

“Obi is a danger to watch out for. I don’t believe Obi will make 25 percent of votes in two-third of the states of the federation.

“I’m not against Obi. I love him and he is a very vibrant leader. I don’t believe he will get the required 25 percent of votes because of my permutations as Ayodele Fayose, but with God, nothing shall be impossible.

“Let me say Obi is more of a chronic cancer to PDP and there is no denying.