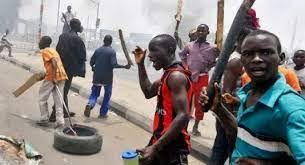 A pregnant staff member and an official of the National Union Of Road Transport Workers (NURTW) in Osun State were beaten by factional members of the union who went berserk while trying to take over some motorparks.

Naijinfo gathered that the members who stormed the state secretariat of the union turned the place into a theatre of war as they inflicted injuries on the state Financial Secretary of the union, Mr. Sunday Akinwale, with cutlasses and other dangerous weapons while a pregnant woman working in the union secretariat identified simply as Doyin was stripped naked and got her cloth torn.

It was gathered that it took the prompt intervention of the security operatives before peace was given a chance.

After much persuasion, those earlier locked in the secretariat were let out and chased away.

It was learnt that hoodlums also stormed Ilesha-Osogbo, Oke-fia, Aregbe and Old garage and Gbongan motor parks where they wrestled powers from those administering affairs of the places.

During the fracas, the hoodlums shot indiscriminately into the air to scare passengers who were at the garages to board vehicles and equally chased away the union officials at the parks.

Narrating his ordeal to our reporter in Osogbo, the state secretary of the union explained that the attackers started with the untoward acts right from the venue of the swearing-in ceremony when they started throwing sachet waters at them before laying siege on the secretariat.

According to him, “I escaped the attack because security operatives whisked me away while responding to my distress calls. In fact, the wounded secretary and the woman battered are presently in undisclosed hospitals receiving treatments.

”  Speaking from his hiding place, he appealed to the new administration in the state to call them to order for peace to reign within the union.

watch the Video Below: