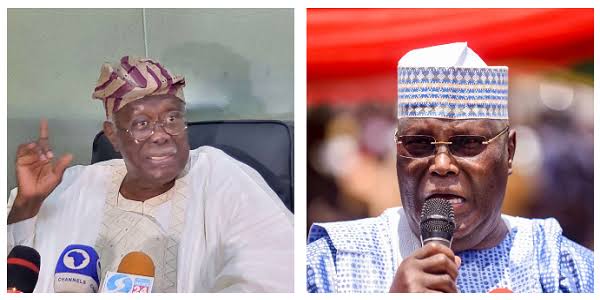 The PDP crisis is a crisis that has come of age with ideally no solution to the problem. The Party has been locked in an internal crisis for the past few months and the situation seems to be unresolved as both sides are reluctant to allow their interest to align together.

The internal wrangling has been linked to the fact that Wike lost to Atiku in the PDP primary election.

Chief Bode George in an interview with Vanguard Newspaper has identified that the PDP crisis is more complicated than any outsider might have thought. According to him, Atiku is losing grasp of the fact that the South West are not on the same terms with him.

He also argued that as a man who’s regarded as a pathfinder in the Yoruba land, it’s impossible for him to tell his people to vote for Atiku as it stands.

He said, ”For me, I can talk about myself, if we do not change that concept by doing what is right, how do I climb a podium as the omo oodua of Yorubaland and ask my people to vote for Atiku?

Do you know what that means? It means the pathfinder of our progenitor. We are saying give us something to take home, you are saying you would do it after the election.”