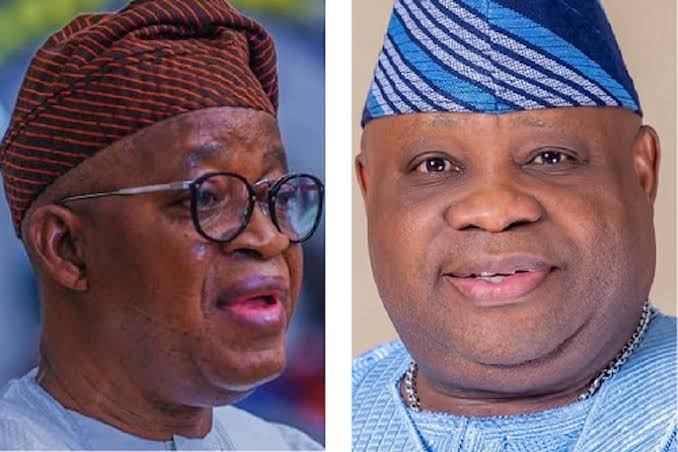 The recent comments by Governor Ademola Adeleke on the position of the debt of Osun state under Governor Adegboyega Oyetola is a reflection of the combative and vindictive posture, yet again, of Governor Adeleke against my principal, Governor Adegboyega Oyetola. It is purely a campaign of calumny against a people-centric government. For the umpteenth time, the true picture of the finances of the state is not hidden; the Annual Auditor-General’s report and the reports from the Debt Management Office (Osun and Abuja) are available for scrutiny.

The latest comments of the incumbent governor to the effect that Governor Oyetola accessed a loan facility after the July 2022 gubernatorial election is nothing but a lie. The current government would have won an iota of credibility for itself if the details of the loan including the figure and the creditor were mentioned. Just to let you know, as captured in the address of Governor Oyetola on the 26th of November, 2022, the Government of Osun did not take any bank loan under his watch. What the state benefited from, like the 35 other states of the Federation, which was well publicized at the time (see The Punch Newspaper (punchng.com) of 19th November 2021), was the monthly intervention from the Federal Government which commenced in December 2021 and terminated in June 2022! This support was to cushion the effect of deductions from the budget support facility and salary bailout accessed by the previous government. One then wonders how support from the Federal Government which started in December 2021, as contained in the document released by the current government itself, turned into a facility sought and accessed after the July 2022 election is beyond comprehension.

Of significant importance is the half-truth presented by Governor Adeleke about the true position of the state’s debt portfolio. For instance, one is at a loss about how the government will report the position of the state debt, leaving out very vital information such as the dates of procurement. In accounting, it is elementary knowledge that no valid amortization schedule can be presented by a competent accountant without a valid date of procurement. For clarity, the State Bond of N30,000,000,000.00 at 14.75% started in September 2014; the Sukuk of N11,400,000,000.00 at 14.75% started in May 2013; the FGN Bond of N86,671,281,863.41 at 14.83% started in August 2015; the Salary Bail-out of N25,871,920,000.00 at 9% started in September 2015; the FGN Budget Support Facility of N17,569,000,000.00 at 9% commenced in July 2016; the FGN Special Intervention Fund of N4,000,000,000.00 (interest-free) was accessed in 2017; the Excess Crude Account (ECA) Secured Term Loan of N10,000,000,000.00 at 9% was accessed in February 2016; and the Central Bank of Nigeria Development Fund (ECA2) of N5,000,000,000.00 at 9% started in June 2017. Where then is the commercial loan traced to the administration of Governor Adegboyega Oyetola? As presented above, all these loans were procured between 2013 and 2017 before the advent of the administration of Governor Oyetola. The question then is where is the loan procured by Governor Oyetola and who is the lender? Also, the claim that Governor Oyetola owed workers salaries and pensions to the tune of N76Bn is unfounded. The salary and pension arrears figure mentioned by Governor Adeleke was owed by the previous government and I challenge the current government to present any available facts to the contrary.

Consequently, it is important to remind the administration of Governor Ademola Adeleke that public finance remains public. No amount of effort to deliberately circumvent fact can change what is publicly available. The Government of Governor Adegboyega Oyetola promised to run a transparent government and it did until the last day in office to the commendation of well-meaning Nigerians and the international community. It will therefore serve the current government well to be serious and deploy its energy towards governing the state rather than fighting an imaginary enemy with half-truth. Government is a continuum and it must be seen as such.