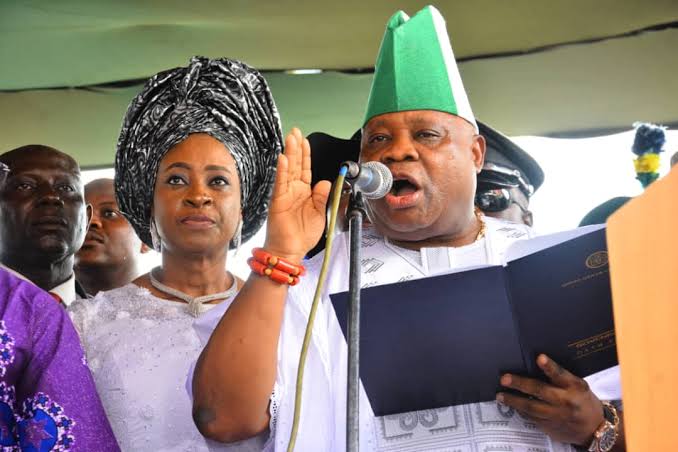 They say behind every successful man is a woman but, in the case of the new Osun State Governor, Senator Ademola Adeleke, there are two beautiful women.

Unlike most men who are married to multiple women without giving them equal attention, governor Adeleke seems to stand out from the pack as he uses every available opportunity to celebrate his wives all the time.

Their birthdays are usually a time for him to express how much he loves them and how much they mean to him. They are Erelu Ngozi and Yeyeluwa Titilayo Adeleke.

At his swearing-in ceremony a month ago, these two women were very conspicuous as they both flanked him in their white lace fabric matched with a grayish-black grandmaster HOH headgear which they accessorised with exquisite gold jewelry.

Apart from being prominent in their respective businesses, their status as ‘First Ladies’ has further solidified their relevance in the social sector, most especially at women functions across the state and beyond. There is Erelu Ngozi Adeleke, the governor’s first wife who has been living in the United States for many years. The 58-year-old fair skinned woman from eastern Nigeria has been married to the governor for close to three decades.

Some people are of the opinion that besides his undiluted love for her, he married her to satisfy the eastern Nigerian blood in him. For many who do not know, the governor’s mother was an Igbo Christian woman from Enugu State named Nnenna Esther Adeleke. She married the governor’s father a Muslim, Raji Ayoola Adeleke who was also a former Senator. Ngozi bore the governor four children; Folashade Adeleke, embattled Shina Adeleke aka Sina Rambo, Adebayo Adeleke aka B-Red and Adenike.

The younger wife Chief (Mrs) Titilola Adeleke who is also in her 50s is the Yeye Soludero of Oke Ila-Orangun in Osun State. The calm and reserved woman who doesn’t like a flamboyant life bore three children for the governor and one of them recently graduated from the family owned Adeleke University in Ede, Osun State.

While this is not the first time that a man married to two or more wives will emerge as governor, the wives are usually always coordinated in a way that only one is seen in public and addressed as First Lady while others simply maintain a low profile throughout their husband’s tenure. Although both women have pledged their support and loyalty to their husband in ensuring his administration delivers on its promises, one wonders how the new governor will govern both the state and also his home to be rancour free, as both women are struggling to outdo each other in order to be the officially recognized First Lady. On the day of his swearing-in ceremony, his two wives released official statements as First Ladies.

While Erelu Ngozi commended the women of the state for coming out en-mass to grace the inauguration of her husband via a statement signed by her media aide and pledging her commitment to ensure the administration delivers on its promises on education, youth and women empowerment, improvement of Osun State Health Sector, amongst others, Yeye Titilola ensured she wasn’t left out. She also released her own statement appreciating the different roles played by different groups to ensure her husband’s successful emergence as governor.

“Being the First Lady involves listening to women, youths, Persons with disabilities, children and translating their concerns into workable proposals. It also involves building consensus to make them workable. I can’t possibly do this job without the involvement and openness of the people. We have promised and will deliver the dividends of democracy to the people of Osun and in my capacity as the First Lady, I will serve as a mother for all and represent the interest of the women, youth and children of Osun state,” her statement partly read.

Hopefully, the governor will find a way to extricate himself from this quagmire before it snowballs and clears the air on who the rightful first lady should be.