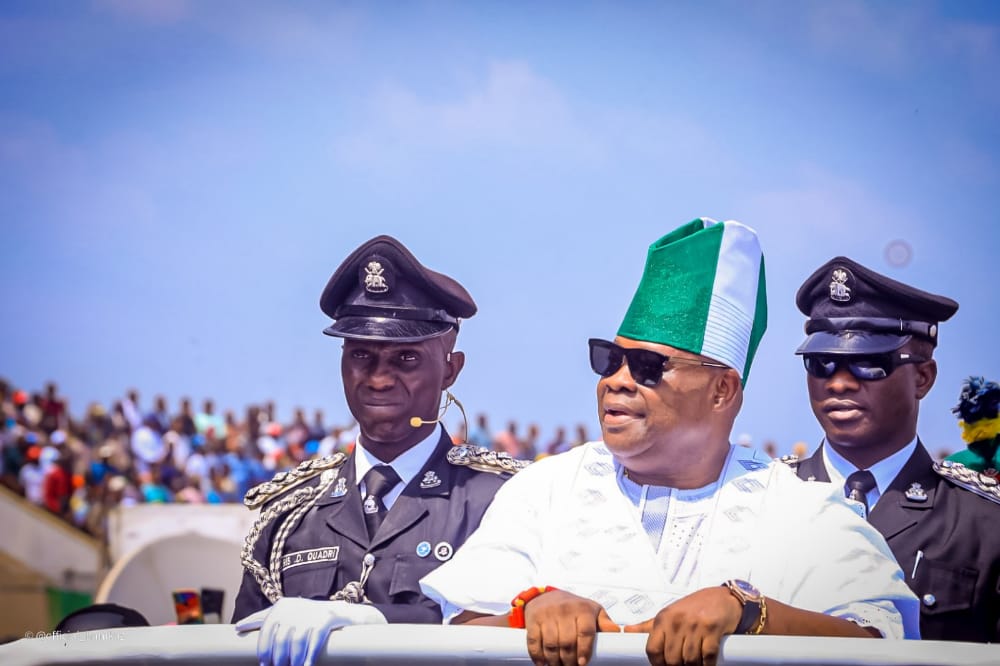 It’s exactly a month today that Senator Ademola Nurudeen Jackson Adeleke was sworn in as the 6th executive governor of our dear state, Osun, the state of Omoluabi.
As expected, his swearing in was met with happiness, joy, songs, dancing and relief from the APC that have been in governance for 12 undisturbed years.

Adelekes coming in was also met with much expectations as the PDP had promised during the campaign with the tag ‘Imole De’.
The Governor on assumption of office hit the ground running with 6 different executive orders which the opposition categorize as military orders.

The surprising trend about the orders is, it is specially focussed against the APC and particularly Oyetola govt.

The Adeleke administration was focused on painting Oyetola black before the people, so they started with anything done after July 17 by Oyetola was done in bad faith and so should be reversed.

To drive home their points, different allegations which till date can’t be substantiated started coming in, I shall list some;

1. Oyetola employed 12000 workers after July 17; it’s shocking that this administration till date can’t provide us with the list of the 12000 workers Oyetola allegedly employed. That’s *Lie No 1*.

Lie No 2: Oyetola stole everything in govt house including cutleries.
It is actually disheartening that this administration even engaged the state media apparatus to propagate such campaign, it’s disappointing to say the least. Omipidan was on ground to reply to this lie, and it later died there. Pls to what purpose was that accusation. It took almost a week from this Govt.

Lie No 3Oyetola owed 407B.
This was actually a show of shame as our highly revered traditional rulers were brought together to meet his Excellency and the key discussion was the alleged debt profile of Osun presented in a document, painfully with the most important column intentionally deleted just to make this lie real.
How do you talk of loan taken without the dates, we all take loans won’t the date of disbursement be mentioned?

This administration till date cannot produce the complete document about Osun debt, it’s really worrisome.
Another painful thing is there’s no single report about what this administration plans for the communities of the monarchs during the meeting.

Lie No Oyetola and APC carted away 2.9b+1.5b worth of vehicles.
This is actually funny, it’s the straw that broke the Camel’s back bcos it confirmed the only focus of this administration is vendetta and not governance.

Different committees were set-up the recovery committee was the fastest, without records of the committee meeting, what we saw was a list that should have been submitted to his Excellency as recommendations for further action,now flying round the social media as an authentic document indicting Oyetola.
I still wonder where they got 2.9+1.5b, it’s just comedy as Omipidan rightly categorized it in his reply. He further stated that some of the alleged cars are being used by this administration, are they not truly comedians???

Lie No 5: Transparency Policy
When HE brought the monarchs together they hinged on transparency to release an incomplete information to mislead the public. We however can’t see that transparency in the distribution of the rice to PDP members in their various wards.
This transparent govt has refused to show us a single clip on how the rice was distributed, to whom it was distributed and what actually was distributed.

What’s funny is, the rice is the only package provided by this administration yet there’s no proof of any distribution and mind you , it should be to the good people of Osun and not PDP members only.

Governance or Vendata
Nov Salary
Oyetola has prepared the November Salary before leaving office, but this administration refused to implement because they wanted to remove the names of APC officials that are legally due to be paid, till date they are yet to pay them.
I think someone needs to be reminded govt is a continuum.

Train Service
This was not implemented this year for no reason because Oyetola an organized governor had already concluded the arrangements before leaving office, our people failed to implement until Punch reminded them, then they started putting up an afterthought defense.

Xmas Decorations
Another people-centric program started by the APC wasn’t properly implemented as only three roundabouts were decorated in Osogbo, it used to be on all poles from Abere to Olaiya.
But this administration didn’t get it right again.

Observation
This administration is set to release news headlines on weekly basis to be debated to disparage Oyetola govt and APC. This is already making the public doubt the readiness and competency of this administration.

This administration is yet to roll out any program for the state aside allegations upon allegations against Oyetola the step-aside governor.

Finally, I humbly advise this administration to face governance and deliver their promises to us in Osun for the little time they’re in govt and stop victimization and Vendata against the past government.

May Osun be great and blessed on all fronts.