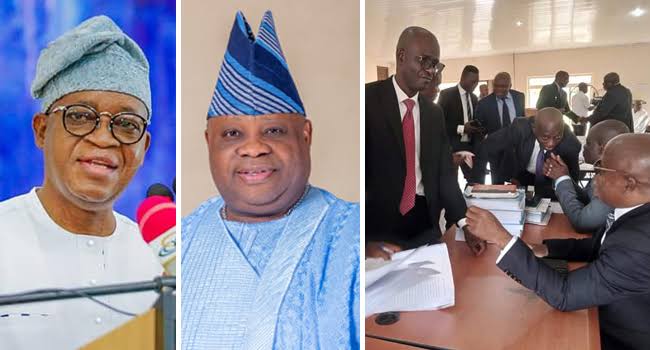 There appears to be fire on the mountain for the new governor of Osun State, Senator Ademola Adeleke and his party, the Peoples Democratic Party, as the life of their infant administration is threatened in view of the seemingly lacklustre and weak defence put forward by their counsels during the hearing of the Osun State Governornship Election Petition Tribunal.

Rather than calling the right witnesses that would help their case and impugn the allegation of over-voting and forgery leveled against Adeleke, the respondents’ counsels chose to revel in showmanship, farcicality and banality. They, strangely, left their burden of proof to be carried and shouldered by the petitioners.

Whereas it is trite in law that facts of common knowledge need no be proved in court, the political worshippers of the “interim” governor in Abere believe otherwise. They reason that Oyetola should have gone a step further to parade witnesses, from WAEC, NECO, NYSC, to establish his forgery allegation against their idol.

(a) common knowledge in the locality in which the proceeding is being held, or generally; or

(b) Capable of verification by reference to a document the authority of which cannot reasonably be questioned.

It is common knowledge that a WAEC result must show an examination number and grade obtained by the candidate.

It is common knowledge that NYSC only issues Exclusion letter to part-time or online graduate, and not Exemption certificate as we have it in the case of Adeleke.

It is also common knowledge that Osun State was created in 1991; and therefore a document purpotedly issued in 1988, but bearing Osun State, as related to Adeleke’s secondary school testimonial, is fake.

So it is ludicrous to read warped arguments being canvassed by some political devotees of the current government shifting the burden of proof, on what is common knowledge, to the petitioners.

Let’s ask: on whose requests were the WAEC official and Ede Muslim Grammar School’s Principal summoned to the Bwari High Court in 2019 when Adeleke’s 1981 May/June result was a subject of litigation? Adeleke and PDP’s requests, of course! So, why did they choose to play ostrich this time around?

Matter-of-factly, the respondents had the opportunity to invite an official of the West African Examination Council to validate the dancing governor’s 1981 Nov/Dec GCE result questioned by the petitioners. Instead, a Bunmi Jenyo, Adeleke’s domestic staff, was brought forth to speak on documents that do not belong to him. Witness Jenyo became a “cynosure” of all eyes at the Tribunal when he struggled to prove that his Nigerian travel passport was the only evidence in his possession to demonstrate that, (1), he attended the graduation ceremony of Adeleke, and (2), that his principal did not obtain a degree from Atlanta Metropolitan State College 24 days after he completed his Penn Foster High School studies.

Legal opinions differ, but consensus is that what petitioners needed to have done on the issue of over-voting was to tarnish the credibility of the alternate election reports presented by the two star witnesses for the respondents, Mrs Abimbola Oladunjoye (INEC ICT Deputy Director) and Mr Samuel Oduntan ( a forensic examiner). And this responsibility counsels for petitioners discharged creditably. Oladunjoye, for example, did not only agree that over-voting took place in the July 16 election, she confirmed that the result upon which Adeleke was announced winner of the contest was untidy and incomplete as at July 17 when the Commission declared him Osun governor-elect.