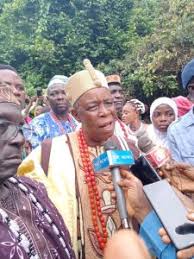 The Eleko of Eko Ende, Oba Abdulrauf Olaniyan, has denied causing crisis in Eko Ajala community in Ifelodun local government area of Osun State, insisting that he is a peace-loving monarch.

Oba Olaniyan while speaking during an interview following protests by some women in Osogbo who alleged that the monarch was terrorising their community after he had earlier removed the traditional ruler of Eko-Ajala, Sunday Akinwale said, as a prescribed authority in his domain, he has the authority to install a chief and dethrone if found wanting, adding that, he doesn’t know what warrant the protest.

While providing details of what led to the removal of Akinwale as the traditional ruler of Eko-Ajala as far back as 2020, Oba Olaniyan said the deposed chief was removed due to financial misappropriation after he was indicted by the Auditor General of the state of collecting 2 salaries.

The Eleko of Eko Ende, who shared documents of the indictment and query, also disclosed that Akinwale went to court to challenge his removal but lost the case.

On the alleged attack on the deposed monarch, Oba Olaniyan revealed that Akinwale reported to the police but that he could not substantiate the false claim.

He then appealed to indigenes of Eko Ajala to embrace peace, adding that Akinwale was removed due to financial misappropriation after proper investigations had been carried out.