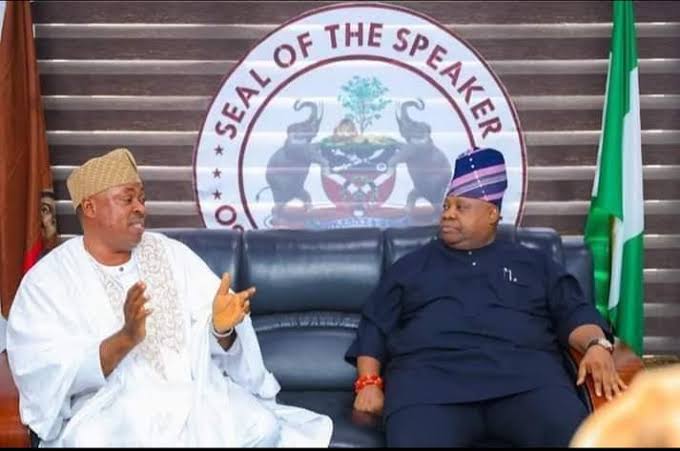 The Speaker of Osun House of Assembly, Mr Timothy Owoeye, on Wednesday said the state law empowers governors, their deputies and some top public officials to go with their official vehicles when they retire from office.

Owoeye made this known during plenary while reacting to the call made by Gov. Ademola Adeleke, asking the former governor Gboyega Oyetola, his deputy, cabinet members and some public office holders who served under the previous administration, to return the official vehicles in their custody.

The speaker said, according to the State Public Office Holders (payment of pension and severance packages) Bill 2018, signed into law in 2019, the former governor is empowered to go away with his official vehicles.

He, however, invited the Secretary to the State Government (SSG), Mr Teslim Igbalaye, and the state Chief of Staff, Mr Kasim Akinleye, to come for a holistic discussion on the matter.

“I want to call on the SSG and Chief of Staff to let us discuss this matter holistically.

“Apart from the fact that we have a Public Office Holders (payment of pension and severance packages) Law, that was passed in 2019, I will not say anything further until I see the SSG and Chief of Staff.

“Both of them are not summoned to appear before the Assembly but to let us come together for discussion.

“There are so many things we can settle without denting the image of anybody,” the speaker said.

Similarly, the speaker said the issue of the total debt profile of the state was being investigated by a 10-man committee of the Assembly, empowered by Sections 128 and 129 of the Constitution of the Federal Republic of Nigeria (1999).

He said the sections of the constitution allow the Assembly to investigate further, the real debt profile of the state, which the Assembly initiated on Dec. 21, 2022.