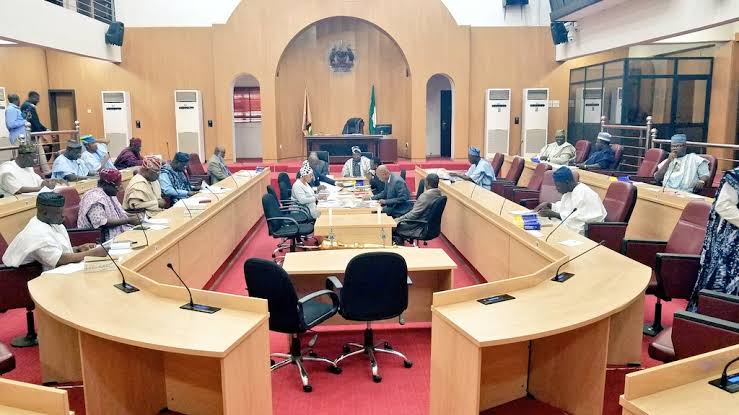 Osun State House of Assembly during it’s plenary session on Thursday described the bribery allegation as calculated blackmail against the parliament.

The consultant of Ilesa Water Project who has been suspended by the state government, Mrs Tawa Williams, had accused the lawmakers of demanding $5million dollar from her, or else, they would blackmail her in the media of doing a shoddy job.

Leading the lawmakers on the subject matter is the Chairman, House Committee on Water and Energy Resources, Nasil Olateju denied demanding bribe from the project consultant.

In the same vein, other lawmakers who spoke during the plenary including Deputy Speaker, Olufemi Popoola, Babatunde Ibirogba, Babatunde Desmond Ojo, Adewale Adedoyin, said the allegation was laced with lies and an attempt to disorganize the Assembly.

Other parliamentarians including Isreal Oyekunle, Adeyemi Adewumi, Adebayo Usamot among others, debunked the allegation, saying it was to rubbish their reputation.

Thereafter, a motion was moved by Majority Leader, Maruf Olarewaju that Mrs Williams should retract her statement and it was seconded by Babatunde Ibirogba.

In his reaction, Osun State House of Assembly Speaker, Timothy Owoeye said the parliament would never demand for cash or kind from anyone.

He said the allegation by the Ilesa Water Project consultant was scandalous and uncalled for just as he wondered why Williams, “who has no stake in Osun would be given the contract of that nature.”

Debunking the allegation further in a statement made available to The Point on Thursday evening by Kunle Alabi,
Media Aide to the Speaker, the Assembly said it was quite unfortunate that the consultant of the Ilesa water project, Engineer Tawa Williams has “resulted to cheap blackmail in trying to cover up for her incompetence, just like a drowning person who will want to cling to any available straw.”

The statement reads, “recall that sometimes in November during plenary, the Assembly had raised concerns over the poor implementation of the project and the non-execution of a $2m treatment plant, doesn’t it defy logic and common sense that one will request for a $5m bribe on a $2m project?

“The House of Assembly under the leadership of Rt. Hon Timothy Owoeye has given Engineer Tawa Williams 24hours to retract her bribery allegation against the committee of the Assembly, her failure to do that within the said hours, the Assembly shall be forced to seek redress in court as no amount of blackmail will stop the Assembly from playing its constitutional role.

“Osun House of Assembly will never ask any Agency of government or individual for any gratification before it could adequately discharge it’s constitutional duties.

“The said Engineer Tawa Williams had shown that she’s not worthy to have been handed such huge responsibility with her recent outburst of resorting to blackmail to keep afloat with her designation as the consultant of the water project.

“The Speaker charged members of the Committee on Water Resources not to be discouraged in the discharge of their duties, “her latest outburst reinforces the need for you to wrap up your work and make your report official “