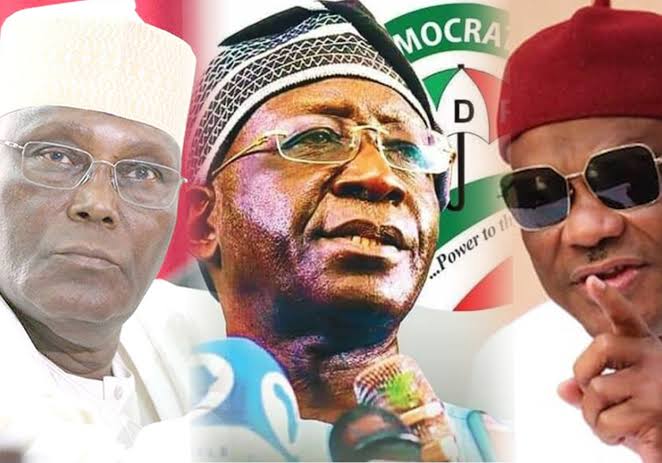 Peoples Democratic Party (PDP) National Chairman, Iyorchia Ayu, has launched what looks like his own counter offensive against the Nyesom Wike-led G-5 governors in the party, ahead of next month’s elections.

Ayu, according to an investigation by The Nation, has shredded the lists of polls agents compiled by the governors and forwarded to the party’s national secretariat in Abuja for onward submission to the Independent National Electoral Commission (INEC).

Only party agents accredited by INEC are allowed at polling stations and collation centres.

Ayu’s fear is that the party cannot entrust its destiny into the hands of those nominated by the dissenting governors.

The Electoral Act allows each party to be represented at each of the polling booths and collation centres .

The agents are required to sign the result sheets before the outcome of voting at the polling units and collation centres are announced.

It was gathered that Ayu and his team at the PDP National Secretariat decided to subject the lists of prospective agents from the G-5 and a few other states to scrutiny for what a source described as safety reason.

“Well, I don’t understand what you are trying to drive at but I must tell you that it is the responsibility of the National Secretariat to forward the lists of party agents to the Independent National Electoral Commission (INEC) ahead of the election,” the source said.

“The state chapters can assist in the compilation of such list for their states but the decision of who does what as party agents lies with the National Chairman. Don’t forget the presidential candidate too may have his own preferred people in the states. The election is his own, and he should have the prerogative to choose those who will represent him as agents at the poll.

“Moreover, there is no way we will have the state leadership of the PDP campaign committee in place and some other people will be the ones compiling lists of agents. The arrangement is that the campaign committee oversees all elections for the party.

So, it is not out of place for the party to insist that all stakeholders should liaise with the PCC in their state in compiling the list of party agents.

“If that is what you mean by Ayu rejecting some lists, you need to understand that it is the normal procedure to avoid duplication of the lists in question.”

A party source confirmed the rejection of the names of some nominees to serve as agents but said those dropped are currently in service as government appointees.

The source drew attention to the provisions of the Electoral Act 2022 which prohibit government appointees from being party agents during elections.

The Act however prescribed that such government appointees must resign their positions three months before the election to be eligible to stand as party agents at voting centres.

Sources also said Ayu, in response to the lists of party agents sent to the National Secretariat by PDP state leaderships in the affected states, urged them to work with the leadership of the campaign committees in their state for the final list.

A PDP chairman in one of the South South states said: “He (Ayu) made it clear it is the lists from the campaign committee that will be profiled and sent to INEC by the NWC. The decision is unusual as it has always been the state executives that compile and send agents’ lists to Abuja. We see this as an attempt to undermine the leadership of the party in our state and we understand where it is all coming from.”

It was also gathered that the aggrieved governors and their supporters are displeased with Ayu’s alleged decision on the matter and are poised for a showdown.

An aide to one of the G5 governors said: “there is no way we will leave our destiny in their hands when we know Ayu is not wishing us well. If they want to nominate the party agents that will work during the presidential election, no problem since they no longer trust the people in charge in the states.

“But how can they also reject our lists for other elections? This is where we smell some rats.”
Governors Samuel Ortom (Benue), Seyi Makinde (Oyo), Ifeanyi Ugwuanyi (Enugu) and Okezie Ikpeazu (Abia) are also in the G-5.

They want Ayu to quit as chairman on the premise that it is against the spirit of the PDP constitution for a section of the country to have the presidential candidate and national chairman at the same time.
They have excused themselves from Atiku’s campaign.