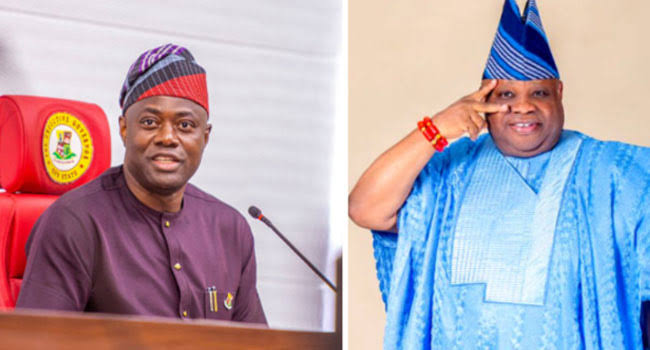 Governor Ademola Adeleke of Osun State was missing in attendance as the Peoples Democratic Party (PDP) in Oyo State flagged off its campaign ahead of the forthcoming general election.

Meanwhile, the gubernatorial candidate of the PDP in Ogun State, Oladipupo Adebutu and his Lagos State counterpart, Olajide Adediran (Jandor) were also absent at the event which was held at Mapo Hall, Ibadan on Thursday.

Recall that Oyo State Governor, Seyi Makinde was also absent during the swearing-in ceremony of Ademola Adeleke as the sixth elected governor of Osun State and second PDP governor in the southwest which was held in November 2022.

Seyi Makinde is one of the five aggrieved governors of the PDP – dubbed G-5 governors, alongside Governor Nyesom Wike (Rivers), Samuel Ortom (Benue), Ifeanyi Ugwuanyi (Enugu) and Okezie Ikpeazu (Abia) who were present at the event – calling for the resignation and substitution of Iyorchia Ayu, PDP National Chairman with a southerner.

However, the absence of Ademola Adeleke and some other gubernatorial candidates of the party in the southwest is believed to be a result of the crisis rocking the party.