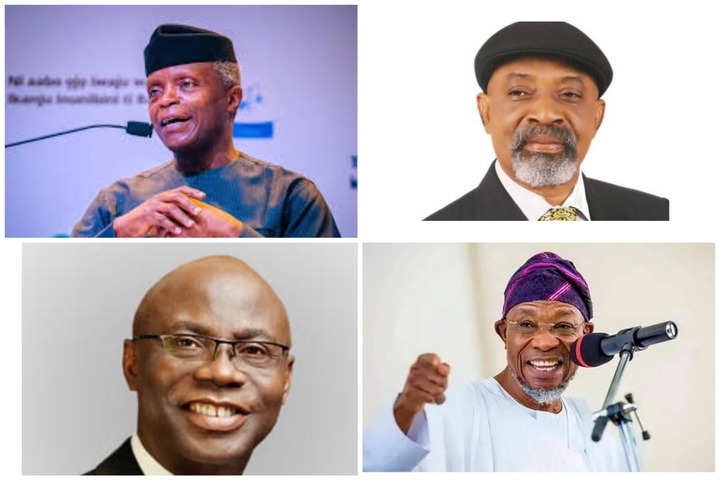 Even as the electioneering campaigns for the 2023 presidential election scheduled for February 25, enter the last lap, some top chieftains of the ruling All Progressives Congress (APC) have consistently shown a lukewarm, non-committal attitude, and even outright apathy toward the campaign of the party’s candidate, Bola Ahmed Tinubu, for mostly understandable reasons and others best known to them. Most of the people on the list lost the party’s presidential primary election to Tinubu.

Not only has the Minister of Labour and Employment been absent from the APC campaign rallies he also made a categorical comment about his commitment to Tinubu’s presidential bid. He said just a few days ago that he cannot campaign for or against any of the four main presidential candidates—Tinubu, Atiku Abubakar of the Peoples Democratic Party (PDP), Peter Obi of the Labour Party (LP), and Rabiu Kwankwaso of the New Nigeria People’s Party (ANPP)—because they are all his friends.

The Minister of Interior has also been conspicuously absent from the Tinubu campaign. There have even been a few speculations about unsavoury comments about the former Governor of Lagos State credited to him. However, those have essentially remained unsubstantiated rumours and nothing more.

The Vice President, who many argue was nominated to that position by Tinubu, has curiously been absent from the latter’s presidential campaign rallies. However, the two men, who are from the Southwest geopolitical zone, met a few days ago.

Osinbajo placed third in the party’s presidential primary election that produced Tinubu. Following the primary election, Tinubu visited the VP on June 10, 2022, where the latter pledged to support him to win the presidential election. He reciprocated the visit on December 21.

The VP was, however, not included in the party’s Presidential Campaign Council (PCC). A spokesperson of the Council, Festus Keyamo, was to later explain that the VP was left out to concentrate on the issues of governance.

Recall that Onu, who is a founding member of the party, had declared during its National Convention at Eagle Square, Abuja, that there was no justice in the party’s leadership selection.

Before the presidential primary election in June 2022, he was at the vanguard of the advocacy for a power shift to the Southeast geopolitical zone of the nation.

Even though he was appointed to the APC’s PCC, the renowned clergyman has remained stoically indifferent about the Tinubu campaign.

It is on record that the eccentric pastor who would never shy away from publicly telling his congregation who to vote for in every election cycle, has, quite uncharacteristically, refused to do so this time around.

The closest thing to supporting Tinubu for president that he has done was in July last year when dismissed the argument against the party’s Muslim-Muslim, insisting that saying should rather focus on nation-building.

The former Minister of State for Education is another party chieftain who has been indifferent, even apathetic to the Tinubu campaign.

Nwajiuba, who scored a single vote at the APC presidential primary election, has instituted two lawsuits seeking to disqualify Tinubu from the race. However, the courts gave judgment in favour of Tinubu in both cases.

The case of the former Governor of Imo State is quite understandable though. Besides the fact that he polled zero votes during the party’s presidential primary, he has been technically sidelined from the scheme of things by the party since 2015 when he attempted but failed to install his son-in-law as the governor of Imo State after him. He was excluded from the party’s campaign team. He has, however, said that he is doing his best to campaign for the party.

“I am doing the much I can. Campaigns don’t start and end with rallies. There are other subtle ways of campaigning. But I am still with APC. I have not left APC.”

The commitment of these individuals to the Tinubu campaign has been so-so at best.