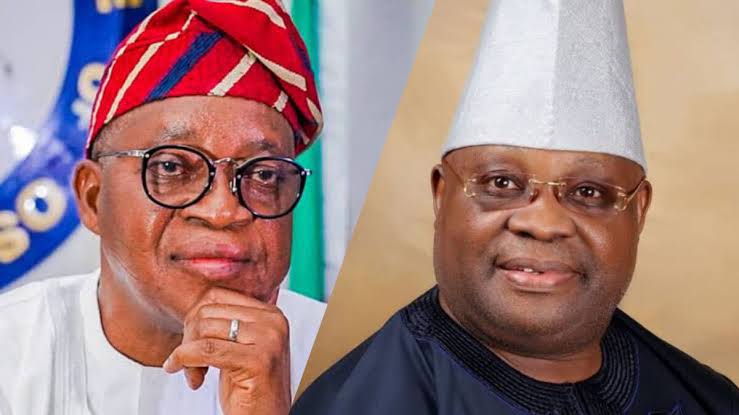 Despite N48billion allocation, Adeleke has been an utter failure in 40 days, plans to embark on borrowing extravaganza

In the last 40 days of Senator Ademola Adeleke as Governor of Osun State, it has been all noise without substance, motion without movement, despite the huge allocation, in the region of N48 billion, available to his government. It is also sad that he is making surreptitious moves in the Ministry of Finance, Abuja, to run the state into further debts by borrowing N123billion.

Here is a breakdown of what the new government has earned since inauguration: N14billion left by Governor Oyetola; N2.7billion SURE-P refund meant for capital projects in local government areas ( another inheritance from Oyetola); N10.1billion federal allocation for November 2022 but shared in December; another N11billion SURE-P refunds received just last week and N10billion PAYE tax of Federal Government workers in the state. The PAYE payment is also a brainchild of Oyetola considering the high level of diplomacy and financial shrwedness that went into play when IleriOluwa and his team interfaced with experts in the finance ministry in Abuja to press for the refund.

And anytime from now, another N9billion will land in the bank account of the state government being payment from World Bank SABER grant. I will return to the SABER issue very shortly.

Unfortunately, beyond paying salary and pension to a fraction of workers, there is hardly anything one can link to Governor Adeleke besides his lust for activation of simplistic committees with nebulous, overlapping and repeated terms of reference. The recent one is the creation of an ad-hoc committee to review assets and liabilities of the newly upgraded University of Ilesha, a responsibility that has been undertaken by another committee set-up by him.

Contrasting the lacklustre government of Adeleke with his predecessor’s, a big gap would easily be identified. For instance, within the first 40 days of Adegboyega Oyetola as governor in Osun, the following milestones, among others, were achieved:

1. On December 11, 2018, a free health mission sprang up in the state where no fewer than 30,000 persons were treated in major towns across Osun State.

2. On December 14, 2018, Oyetola inaugurated a six-man committee, chairmanned by him, to revitalise the health sector in the 332 wards in the state.

3. Oyetola kicked off the process for rehabilitation of the general hospitals in Ejigbo and Ifetedo

5. Oyetola and his team held strategic meetings with key federal ministries and agencies like Ministry of Finance, Ministry of Works to initiate partnership with them, a collaboration that later proved very useful for an administration that inherited humongous debt and nearly collapsed economy.

However, what we have now in Osun is a sharp departure from the standard elevated by Oyetola. The order of the day is institutionalisation of buffoonery, thuggery and victimization of opposition members through mindless committees enlivened by the dance-loving politician .

In Osun, committees are no longer set-up, as it was traditional during Oyetola, to see to rehabilitation of schools, roads and health centres, they are now emplaced to run after imaginary adversaries and men of the defunct administration “who went away with plates and cutlery.” Pathetic.

Now I return to World Bank SABER grant which will be available to Osun State any moment from now.

In September 2022, the World Bank approved a loan of $750 million support to the Federal Government of Nigeria for the Nigeria State Action on Business Enabling Reforms designed by the Bank, Presidential Enabling Businesses Environment Council (PEBEC) and the Nigeria Governors’ Forum. (NGF).

The fund is to improve critical business-enabling policy and institutional actions that will incentivise private sector development in 36 states ( including the FCT), in a similar format with State Fiscal Transparency, Accountability and Sustainability (SFTAS) programme which ended in 2022.

Recall Governor Oyetola, for his prudent management of resources and ability to deploy little resources judiciously to achieve more, was recognised the Best Governor by the World Bank’s SFTAS in 2022, beating other 35 governors to clinch the coveted award. The state was also adjudged the “TOP” performer on Domestic Revenue Mobilisation by the Bank.

Given the Oyetola administration’s sweeping institutional reforms and commitment to deepening of Ease of Doing Business Reforms in the state, Osun State, after a rigorous selection process, was picked as a recipient of N9billion last year to drive the SABER programme in the state. The money was not yet paid to Osun before Oyetola “stepped aside” last November.

But the money is on its way to the state as I write. Strangely, the government of Ademola Adeleke which never lifted a finger but is to be the greatest inheritor of the sweat of Oyetola and his men is now the most vicious vilifier of the last administration. Saddening.

Nevertheless, it is hope that this experience will humble the vindictive government and persuade the village headmasters in Abere to be more circumspect. Again, the governor should discontinue his kurukere movements aimed at running the state into more debt to create troubles for Oyetola when he returns to the Bola Ige House in the next few months. Oyetola did not borrow a dime in his 48 months in government, Adeleke should not during his temporary stay in the saddles. All good-spirited citizens in Osun are charged to call the BVAS Governor to order. No to N123billion FG loan, please!