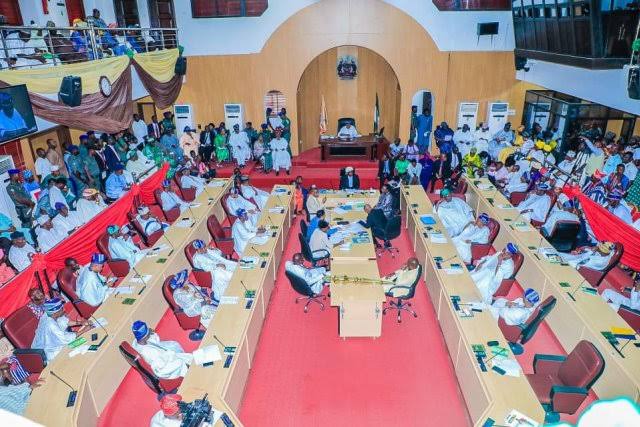 The planned removal of Osun State House of Assembly Speaker, Timothy Owoeye, over alleged financial misdemeanor and high-handedness is raising dust in the legislative chamber.

THE WHISTLER reliably gathered that the crisis started brewing last year when Owoeye started hobnobbing with Governor Ademola Adeleke elected on the platform of the Peoples Democratic Party(PDP) and trying to ingratiate the house, dominated by the All Progressives Congress(APC) lawmakers, with the governor.
A source told this website that, “ In December 2022, Adeleke gave the house, through the Speaker, welfare package for Christmas celebration but what was passed and shared to the lawmakers did not correspond with what was given to the speaker.

“The lawmakers were given one bag of rice and one chicken with N250,000 each. The members got to know what the Speaker got from Adeleke through a minority member of the house and it stired crisis. They were mulling his removal last year but it was quashed by the intervention of former governor, Adegboyega Oyetola.

“Meanwhile, the lawmakers of APC got know again later in January 2023 that the Speaker has been romancing Adeleke and negotiating with the governor so that he can come back to the house during the forthcoming election.

” The information has further infuriated the house having the knowledge that Owoeye is adjourning the sitting of the house for a very long time as the sitting was adjourned since 2022 till February 2023.”

However, members amid the planned impeachment of the speaker, reconvened on Thursday at Osun State House of Assembly complex to deliberate over the crisis.

Our reporter who visited the house saw that the lawmakers parked their cars infront of the complex to hold a close door meeting over the crisis.

A credible source who was privy to the meeting disclosed that 12 offences were leveled against Owoeye among which were financial impropriety and shady dealings.

The source said out of the 26 lawmakers, ten of them had signed the impeachment process including four PDP lawmakers and six APC lawmakers.

However, the Speaker through his spokesperson, Kunle Alabi, reacting to the crisis said, “As far as Osun State House of Assembly is concerned, we remain one irrespective of whatever change in government.

“There was no need for money creating any division. Whatever the house got was its legitimate earning.”