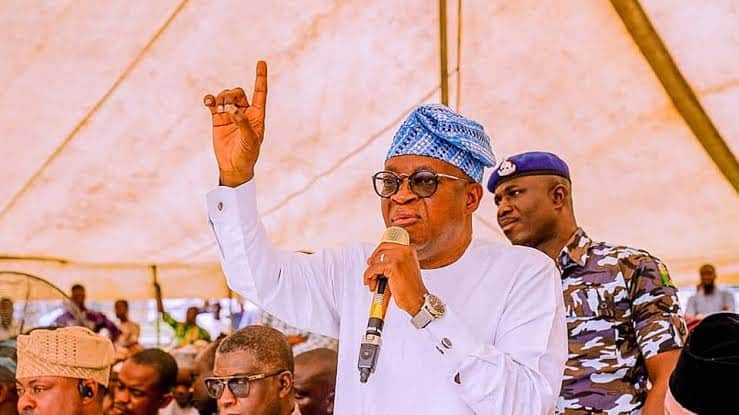 The presidential candidate of the Peoples Democratic Party (PDP), former President Atiku Abubakar, has been told not to be deceived by the mere mouth making and empty promises of the embattled Osun State Governor Ademola Adeleke that he would deliver the state in particular and the South-West in general for the PDP presidential candidate in the February 25th, 2023 election.

Adeleke was captured boasting in Ibadan, the Oyo State capital yesterday, to repeat the electoral feat of his party, the PDP, during the July 16, 2022 governorship election in Osun State in the whole of the South-West in the forthcoming election.

However, in a statement co-signed by the Chairman and Co-chairman of the Media and Digital Communication Directorate, Tinubu/Shettima Presidential Campaign Council (PCC) in Osun State, Engr Remi Omowaiye and Chief Kola Olabisi respectively, Adeleke’s wish regarding the general elections in the South West has been described as a thought of a drunken sailor, a thought that vanishes as soon as reality of his perilous drinking situation dawns on him.

The Tinubu/Shettima Presidential candidate spokespersons in Osun State advised the obviously drowning Governor Adeleke to stop daydreaming and halt arrogating to himself the qualities he doesn’t possess.

They observed that it was shameful that a governor encumbered by his hopeless case at the election tribunal on account of his forged academic credentials and recklessly rigged election could be found gallivanting in the political capital of the South-West and dishing out the empty promises that himself and his party do not have an inch of capacity to accomplish.

“Adeleke should know that only a foolish fairy princess appears more than once as it is an act of incurable and maniacal idiocy for a lady to allow herself raped repeatedly in a similar manner by a serial rapist.

Adeleke should be told point-blank that his administration is a bundle of disappointment and a source of regret for a handful of voters who fell under his spell and made his pyrrhic victory possible.

As if the insult from the regent Governor Adeleke was not enough, he canvassed to spread the control of the PDP to all the South-West states to enable the people enjoy the dividends of democracy in the manner it is being enjoyed in Osun State.

With the empty promises of the interim Governor Adeleke, he was mereby stabbing the truth on the head as it is on record that the lives of the people of Osun State have become hellish where the cheapest item is avoidable death, attacks of the opposition politicians by political hoodlums, destruction of campaign billboards and constant policy somersaults of the government since the ascension of the controversial Ede-born governor to the seat of power.

It should dawn on Adeleke and the daydreaming political eunuchs around him that their serial presidential candidate is an extremely difficult product whose type is not capable of providing the political future needs of the people of this country..

The people of Osun State in particular and the South West in general would not have anything to do with a president who would end up selling all available items in sight and subsequently appropriate the proceeds to the members of his family, his cronies and other political crooks.

Before raising the hope of the corruption enmeshed perennial presidential contestant from Adamawa, Adeleke should encourage his presidential idol his ignoble role in the selling of the now moribund Machine Tools and The Steel Rolling Mills in Osogbo instead of promising Atiku an obviously impossible utopia.

The people of Osun State and the South-West have shined their eyes already and are poised to reject Atiku, the methuselah presidential hopeful, then force him to run back to his new abode in Dubai, after the imminent debilitating defeat of February 25, 2023