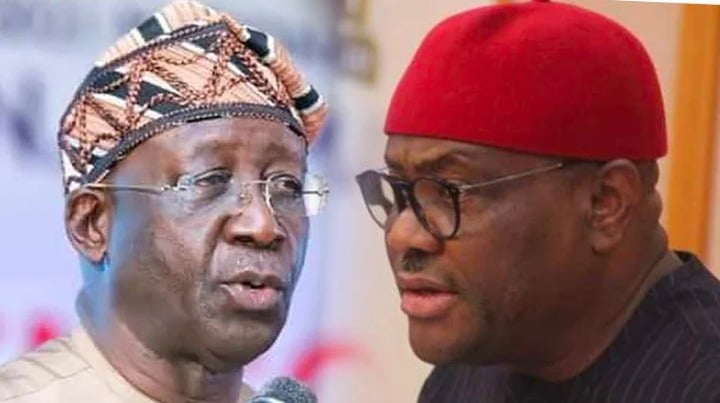 Rivers State Governor, Nyesom Ezenwo Wike has described the dissolution of the Ekiti State executive committee of the People’s Democratic Party (PDP) by the Iyorchia Ayu-led National Working Committee (NWC) of the party as an act of tyranny that will be challenged in court.

The governor, who dared the PDP National Chairman, Ayu to suspend him or any of the G-5 governors, warned that the resort to despotism by the NWC will not do the PDP any good in the forthcoming general elections.

The Rivers State governor stated this while speaking at the campaign flag-off rally by the State PDP Campaign Council in Bori, Khana Local Government Area on Saturday.

Governor Wike explained that the reason why the dissolution of the Ekiti State working committee will be challenged in court is that there are still members of the PDP who believe in the rule of law and that the party should respect its constitution.

He stressed that the Ayu-led NWC resort to tyranny will do more damage to the PDP as far as the 2023 general election is concerned.

The Rivers State governor dared Ayu and his cohorts to extend the despotic tendencies to the G-5 governors and see if they could withstand the repercussion.

“So, we are waiting for you to announce my own and any other of my friend. Like I have said, when a man says you will not sleep, he too, will he sleep. Will Ayu sleep? Will those his cohorts sleep? So don’t worry, we have the capacity to pay back. We have the capacity to tell you that enough is enough.”

Governor Wike urged the Rivers State electorate in Khana to vote for the PDP governorship candidate, Sir Siminialayi Fubara, as well as all national and legislative candidates in the 2023 general election in order to consolidate the achievements of his administration.

The governor cautioned that people not to vote for the All Progressives Congress (APC) governorship, Tonye Cole, who is facing criminal charges for his obnoxious role in the sale of Rivers State government assets by Chibuike Amaechi led administration.

“Some people are shameless. A man who colluded with his master to strip Rivers State of its resources sold our gas turbines which were constructed, and installed by Dr Peter Odili’s administration. It was sold at the cost of $308M. So, we have filed criminal charges against Tonye Cole.”

The governor described Cole’s claim that all the flyovers constructed by his administration are mainly in Port Harcourt and Obio-Akpor local government areas as hypocritical since he lives in Port Harcourt.

“Again, we have agreed with Julius Berger to dualise from Emohua to Tema junction. So, ask him rather than siphoning Rivers state government money, what did they do. What has he contributed to the people of the State? Nothing.”

Governor Wike announced that the State government has awarded the contract for the reconstruction of internal roads in Bori in fulfilment of his promise during the recent commissioning of the dualisation of the Bori-Kono road.