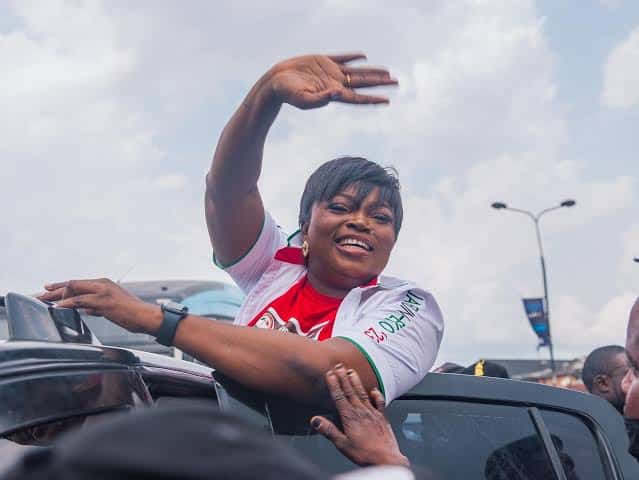 Nollywood actress and PDP deputy governorship candidate in Lagos State Funke Akindele was, on Tuesday, chased out of the Ikosi fruit market by suspected thugs while campaigning.

Speaking on the incident, the PDP governorship candidate, Abdul-Azeez Adediran, popularly known as Jandor, in an interview with NAN, confirmed that their campaign was cut short following the incident.

During a meeting with the chief Imam of Ketu Central Mosque, Jandor confirmed that a security team member was stabbed while others, including journalists, were injured.
However, he confirmed that the actress left the campaign train while the team continued to move around the streets in the council.
In October 2022, Jandor cried out over similar situations that had happened repeatedly in various local government areas since he kicked off his tour of 245 wards.

PDP Lagos spokesperson, Hakeem Amode, in an interview with PREMIUM TIMES alleged that the local government chairperson sent the hoodlums to disrupt their campaign.

He said: “Usually when we go to the market, Funke Akindele goes to the market to speak with the Market women, and we know it is our right to be able to talk freely, a campaign to anybody.”

He alleged that the Ikosi LCDA Chairperson- Abolanle Bada, brought thugs to intimidate them.

He said: “the local government chairperson came into the market, used her car to block and brought a bunch of thugs to attack us in Kosofe local government, which is very, very sad; it is unbelievable we are not allowed to speak to people freely.”

“Under the new electoral act, we are free to campaign anywhere; this is Lagos, where we should be able to talk to everybody without intimidation or discrimination. That should not even happen,” he added.
He also claimed that this was not the first time it has happened.